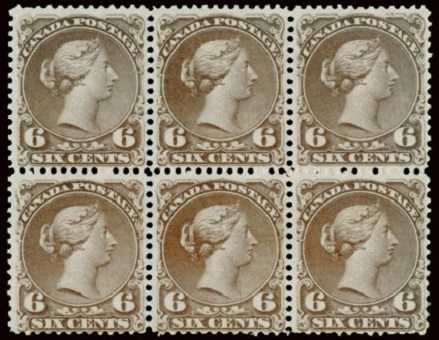 Definitive Dominion of Canada stamps first appeared in 1868, and all of them featured the right-facing portrait of Queen Victoria.  A block of the six cent denomination is shown above. 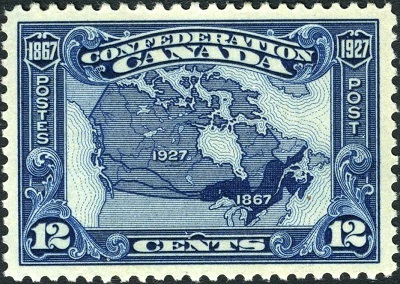 Delegates from the British North American colonies of Upper Canada (Ontario), Lower Canada (Quebec), New Brunswick, and Nova Scotia met in 1864, in Quebec City, and in 1866, in London, to discuss the possibilities of joining together to form a confederation.  On January 1, 1867, they met again in London to draft the British North America Act, agreeing to become provinces of the new confederation, and determining that the new country would be called the Dominion of Canada.

These early flags also existed with a blue background, called the Blue Ensigns, but they were not used as often as the Red Ensigns shown above.

This fledgling country officially came into existence on July 1, 1867, and it would eventually grow into the thriving nation that we now call the Dominion of Canada, or just, Canada.

This sparsely populated yet huge country, over two million square miles larger than the continental United States, has showcased its incredible beauty and abundant natural wonders on pictorial Canada stamps since the early 20th Century.

Collecting modern Canada stamps can be educational, and it can result in an impressive looking collection at a reasonably small cost for the stamp collector.

For the philatelist, the 19th Century and early 20th Century stamps of Canada offer a multitude of possibilities, including a large number of paper types, shade varieties, and plate varieties.  Back when I collected Canada stamps, the Large Queens were my favorites.  Of course, I collected them all in used condition, and discounting the laid paper varieties, all of them are attainable for a reasonably moderate cost.

Historical articles and reviews of the postage stamp issues of the Dominion of Canada will eventually appear in the link section at the top of the third column of this page.  The issues for the Province of Canada, from 1851 to 1864, are included in the British North America section of this website.  However, for completeness-sake, I have included them in the link section at the upper right.

Return to Home Page from Dominion of Canada Stamps