The Campione d'Italia is a commune or municipality, on the Eastern shore of Lake Lugano, belonging to the Italian Province of Como.  Though officially Italian territory, geographically, this commune is located completely within the Swiss Canton of Ticino.  Though less than one mile from the Italian border, the nearby mountains make travel from the commune into Italy a very long journey.

This rather strange geopolitical arrangement was brought about by a single historical event.  In 1798, the region of Ticino voted to become a Canton of the Swiss Confederation.  At the same time, the Italian residents of the enclave on the Eastern side of Lake Lugano voted to join the Lombardy region of Italy.

Formerly known as just Campione, the "Italia" part of the name of the enclave was added by Benito Mussolini during the 1930's, in order to emphasize its status as Italian territory.

Beginning in 1944, special postage stamps were produced for the enclave, in cooperation with the Swiss postal service.  The new stamps were denominated in Swiss Francs.  They were valid for postage in Campione and to Switzerland and Liechtenstein.  Because the enclave was not recognized by the UPU, however, postage to other foreign destinations had to be paid by Swiss stamps. 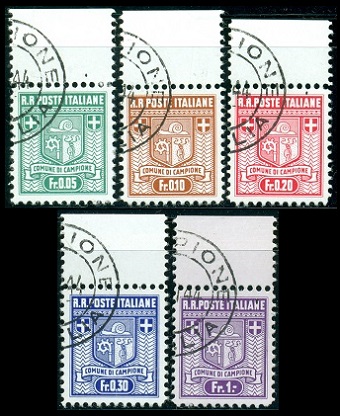 The five definitive postage stamps shown above were first issued on May 20, 1944.  They are typographed on white, unwatermarked paper.

The first printing was issued on May 20, 1944, and the stamps are all perforated 11 1/2.  The Zumstein / Michel catalog attributes are as follows:

The second printing was issued on June 28, 1944, and the stamps are all perforated 11.  The Zumstein / Michel catalog attributes are as follows:

The seven pictorial definitive postage stamps shown above were issued on September 7, 1944.  They are photogravure and printed on white, unwatermarked paper.

The Zumstein / Michel catalog attributes and the descriptions of the pictorial designs are as follows:

Due to the short period of time the stamps of the Campione d'Italia were in use, most of their usages are of a philatelic nature.

Return to Switzerland Stamps from
Campione d'Italia - Issues of 1944