Commemorative Bulgarian stamps first appeared in 1896, on the 20th Anniversary of their becoming a self-governing principality within the Ottoman Empire.

The four commemorative stamps shown above (Sc. #43-46) were issued on February 2, 1896 to celebrate the upcoming Baptism of Prince Boris.

The common designs of the four stamps feature the Coat of Arms of Bulgaria.

Boris Klemens Robert Maria Pius Ludwig Stanislaus Xavier (1894-1943) was the eldest son of Prince Regnant Ferdinand of Bulgaria (1861-1948) and Princess Marie Louise of Bourbon-Parma (1870-1899).  The two year old prince was baptized in the Eastern Orthodox Church on February 11, 1896.  His godfather was Tsar Nicholas II of Russia. 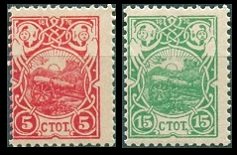 The two commemorative stamps shown above (Sc. #53-54) were issued on April 20, 1901 to celebrate the 25th Anniversary of the Insurrection for Independence in April 1876, also called the April Uprising.

The common designs of the two stamps feature a Cherry-Wood Cannon.

The Bulgarians used 52 Cherry-Wood Cannons during the 1876 April Uprising.  These wooden cannons, though ineffective in battle, became one of the symbols of the Bulgarian struggle for independence from the Ottoman Empire. 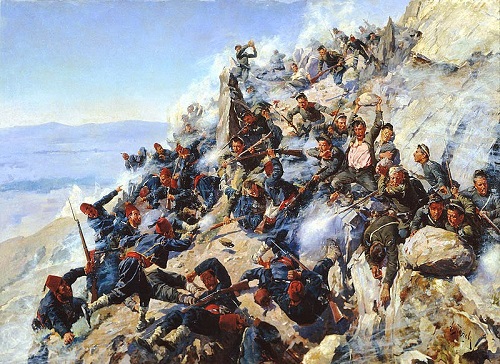 The three pictorial Bulgarian stamps shown above (Sc. #70-72) were issued on August 29, 1902 to commemorate the 25th Anniversary of the Battle of Shipka Pass in the Russo-Turkish War.

The common designs of the three stamps are based on the 1893 painting, "The Defense of the Eagle's Nest", by the Russian painter Alexey Popov (1858-1917).

The Battle of Shipka Pass was actually four battles, fought between August  1877 and January 1878, which were decisive Russo-Bulgarian victories.  A small force of about 2,500 Russian troops and about 5,000 Bulgarian volunteers succeeded in holding Shipka Peak, also known as the Eagle's Nest, against an Ottoman army of overwhelming size.  The victory enabled the Russo-Bulgarian forces to crush the Ottoman army at Philippopolis and go on to threaten Constantinople itself.  The Russo-Turkish war soon ended, enabling Bulgaria to free itself from internal Ottoman control and to become a self-governing principality. 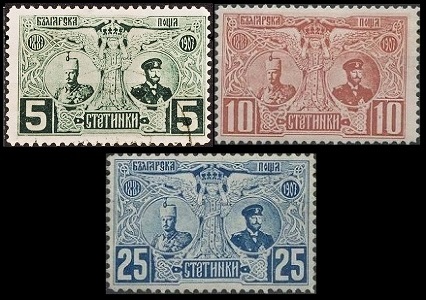 The three commemorative Bulgarian stamps shown above (Sc. #74-76) were issued on August 12, 1907 to celebrate the 20th Anniversary of the Accession to the Throne by Ferdinand I.

The common designs of the three stamps feature portraits of Prince Regnant Ferdinand in 1887 and in 1907.


Return to Bulgarian Stamps
from Commemoratives of 1896-1907