For definitive Bulgarian stamps, the period from 1889 to 1910 was a time of incredible change.  During this time, Bulgaria would evolve from an autonomous principality within the Ottoman Empire to an independent European kingdom.  A new series of heraldic lion definitive stamps would be issued, yet they would soon be replaced by a set of portrait definitive stamps for Prince Ferdinand, soon to become Tsar Ferdinand I of the new Kingdom of Bulgaria! 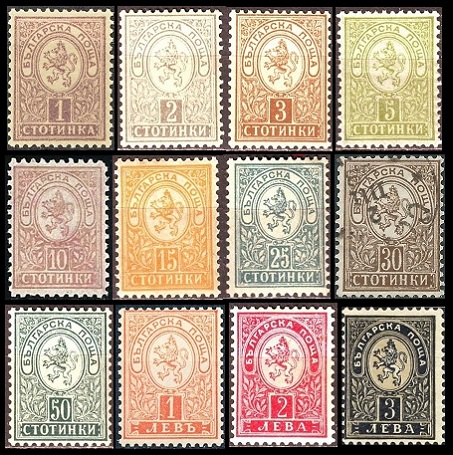 The twelve new definitive Bulgarian stamps shown above were issued between 1889 and 1896.  They are printed on unwatermarked paper, and the perforation gauges range from 10 1/2 to 13 1/2.

All of the stamps listed in the detail table above also exist imperforate.

The two definitive Bulgaria stamps shown above were overprinted and revalued between 1892 and 1895. 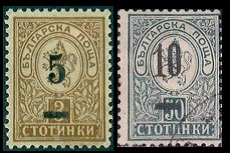 The two definitive Bulgaria stamps shown above were overprinted and revalued in 1901. 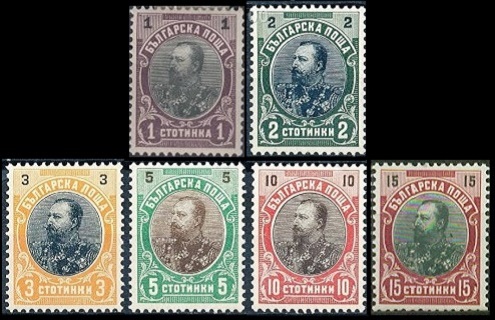 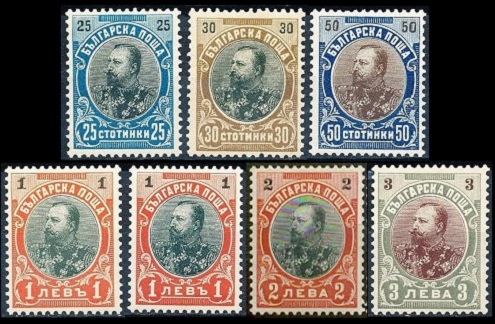 The thirteen new portrait definitive Bulgarian stamps shown above were issued during October 1901.  They are typographed on unwatermarked paper, and they are perforated 12 1/2.

These new definitive stamps feature a contemporary portrait of Prince Ferdinand.  Ferdinand had been elected as Prince Regnant of Bulgaria by the Grand National Assembly on July 7, 1887, and he remained in that role, until he became the Tsar (King) of an independent Kingdom of Bulgaria in 1908.

The portrait definitive Bulgarian stamps of the types shown above were re-valued between 1903 and 1909. 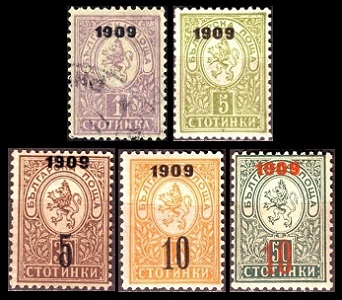 The five definitive Bulgarian stamps of the types shown above were overprinted "1909" and / or re-valued during 1909. 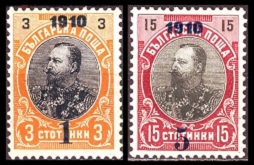 The two portrait definitive Bulgarian stamps of the types shown above were overprinted "1910" and re-valued in October 1910.

Many different errors exist of almost all the overprinted and revalued definitive stamps shown on this page.  See the major stamp catalogs for details.


Return to Bulgarian Stamps
from Definitives of 1889-1910 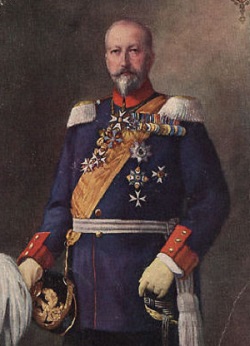 Tsar Ferdinand I of Bulgaria

Ferdinand Maximilian Karl Leopold Maria of the House of Saxe-Coburg and Gotha (1861-1948) was the Prince Regnant of Bulgaria from 1887 to 1908 and the Tsar of Bulgaria from 1908 to 1918.  He was also an accomplished author, botanist,  entomologist, and PHILATELIST !!  He was quite adventurous, and in 1910, he became the first European head-of-state to fly in an airplane.

Of course, being born into the House of Saxe-Coburg and Gotha meant that Prince Consort Albert and Queen Victoria were his uncle and aunt.  By this birthright, he was directly related to just about all of the European royal families of his time!

Ferdinand didn't care much for the Austro-Hungarian Emperor, or the German Emperor, but he entered into a treaty with them that pledged the restoration of former Bulgarian territories in Serbia and Macedonia.  With World War I approaching, he was forced into an alliance with Austria-Hungary, Germany, and his former enemy, the Ottoman Empire.  And, they LOST the war!

On October 3, 1918, in an effort to save the Bulgarian monarchy, he abdicated the throne in favor of his oldest son, Boris, who then became the Tsar of Bulgaria.

Ferdinand returned to Coburg, Germany, his ancestral home, where he lived in exile for the remainder of his life.  He is buried in St. Augustine's Church in Coburg, Germany.