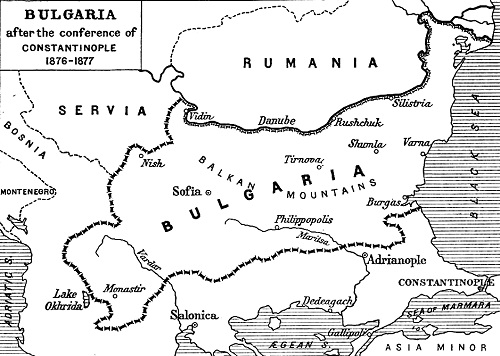 When the Second Bulgarian Empire collapsed in 1396, all the Bulgarian territories south of the Danube River became a principality within the  Ottoman Empire.  The Bulgarian struggle for independence during the 18th and 19th Centuries led to the April Uprising in 1876.  The brutality of the Ottomans, in putting down the uprising, resulted in the Russian Empire declaring war on the Ottoman Empire in 1876.  The Russian forces, with the aid of many Bulgarian soldiers, were victorious.

On March 3, 1878, as a result of the Treaty of San Stefano, Romania, Serbia, and Montenegro became independent kingdoms, and Bulgaria became an autonomous principality within the Ottoman Empire.  The self-governing Principality of Bulgaria would not actually be free of Ottoman external control until October 5, 1908, when it became the Kingdom (or Tsardom) of Bulgaria. 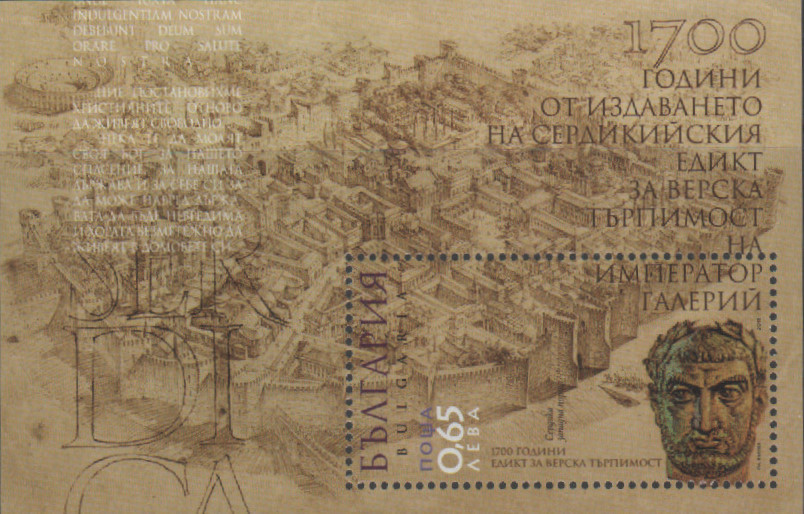 1,700th Anniversary of the Edict of Serdica by the Roman Emperor Galerius.
Galerius (Ruled: 305-311) was a native of Serdica (present day Sofia, Bulgaria).
(Souvenir Sheet issued in 2011)

Of course, Bulgaria has an impressive (recorded) history, dating back to the 5th Century B.C., as part of the Ancient Greek geographical area known as Thrace, the Thracian province of the Roman Empire, and even as an Empire in its own right.  These historical roots have been well documented on the postage stamps of Bulgaria.

Since the first Bulgarian postage stamp of 1879, more than 5,000 different postage stamps have been issued, with most of them being reasonably affordable.  Collecting Bulgarian stamps can offer many years of enjoyment and can result in a very impressive looking collection.  The subject matter of Bulgarian commemorative stamps also offers many different thematic collecting possibilities. 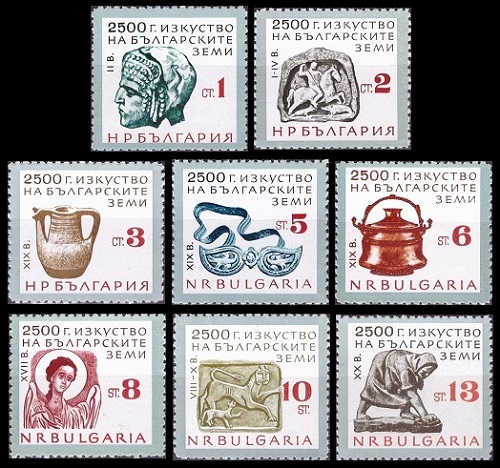 Reviews of many of the postage stamp issues of Bulgaria, as well as the occasional historical article, will eventually appear in the page link section at the upper right.

Illustrating and describing ALL the stamps of modern Bulgaria is far beyond the scope and capability of this website.  Fortunately for everyone, someone has already done that.  Here is a link to an excellent website illustrating all the stamps of Bulgaria.

For a new collector, considering the collecting of any Bulgarian stamps,  the Cyrillic alphabet can seem a bit intimidating.  From the stamp identification standpoint though, it is really not that difficult.

There are many resources on the internet, where you can find the Cyrillic alphabet.  Many of them also have pronunciation aides in making the sound of each of the Cyrillic letters. With a little effort, you can memorize the Cyrillic letters and what they sound like, then it is very easy to phonetically pronounce most of the words. One also needs to learn the numbers from 1 to 10 -- that is easy.  Most of the proper nouns and place names sound very similar to the way they are pronounced in Western languages, so with a little effort in learning the alphabet and the basic numbers, one should be able to easily identify most of the Bulgarian stamps.