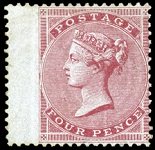 Surface Printed (or Typographed) British stamps were first produced in 1855, and this printing methodology was used for all the definitive postage stamps above the Two Pence denomination.  All of these surface printed stamps were produced by Thomas De La Rue & Co.

Until 1880, the Line Engraved 1/2 Penny through 2 Pence denominations continued to be produced by Perkins, Bacon & Co., as they had been since 1840.

After 1880, Thomas De La Rue & Co. took over the production of ALL the postage stamps of Queen Victoria, and from that time, all of the definitive British stamps were surface-printed (typographed).

Ten different paper watermarks were used for the production of the surface-printed postage stamps, between 1855 and 1901.  As the technical characteristics of the stamps are not constant throughout this time period, each of the watermarks will be shown and described along with the particular issues for which they were used. 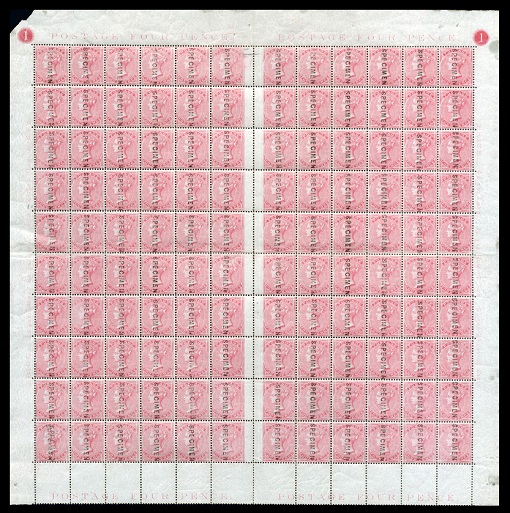 Full Sheet of 120 of the 1856 Four Pence Rose on White
This sheet would be separated into four panes of thirty.
Scott #25-S 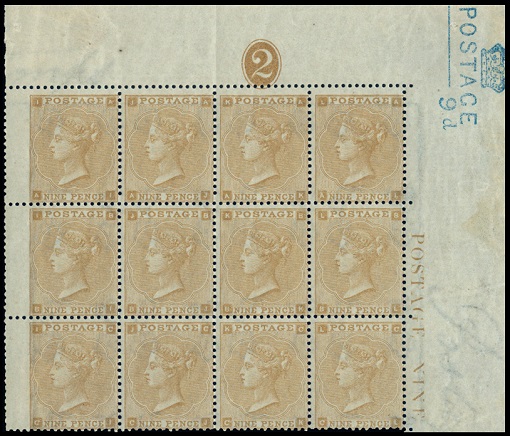 On the surface printed series noted above, the sheets of stamps all have a wide gutter down the middle.  The center of the gutter is perforated vertically, so that the sheets can be separated into smaller panes for sale to the public.  When these sheets are torn into panes, the horizontally perforated area of the stamps adjoining the gutter are about 5 mm wider than the other stamps in the pane.  These stamps are called "wing margin" stamps.

The plates employed for many of the surface printed stamps were different sizes and had varying numbers of impressions per pane.  However, the process of placing the perforated vertical gutter through the middle of the sheets was the same for all of them.

These wing margin stamps are actually much scarcer than the normal sized stamps in each pane, and many collectors enthusiastically seek them.  When I collected British stamps, I loved the wider wing margin stamps, and in fact ALL OF my surface printed stamps, through the Two Shilling denomination, in the groups noted above were wing margin examples.

NOTE!  The way 19th Century British stamps were printed and perforated, there is NO SUCH THING AS A STRAIGHT EDGED stamp.  British stamps of this era that are offered as straight edged examples, are actually wing margin examples or mutilated normal examples that have been trimmed! 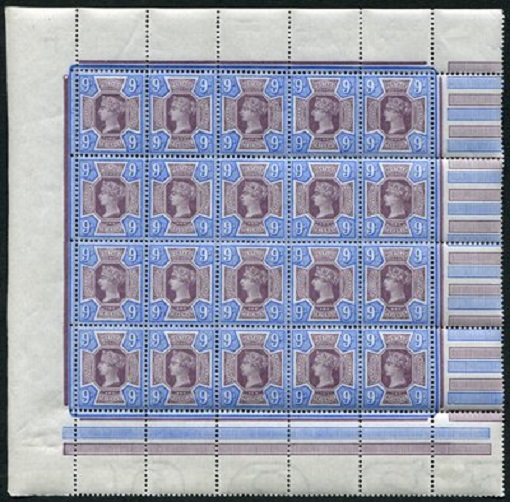 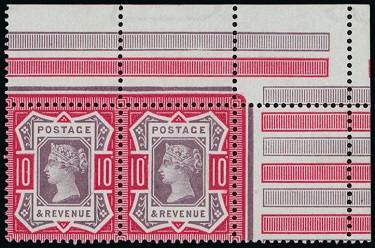 Beginning in 1881, many of the plates used to print the surface printed lower denomination stamps had marginal lines around the outer edge of each pane of stamps.  These are sometimes referred to as "Jubilee Lines", as the period in which the lines were put into full use coincides with the time of the Queen's Golden Jubilee.

This was done in order to reduce the pressure on the printing plate and in order to achieve clear impressions on the stamps themselves.

On the bi-colored 1887-1892 issues, colored pillars were also added to the gutters around the panes of stamps.  Some examples are shown above.  Marginal stamps and multiples with these lines and pillars are very scarce, and they demand substantial premiums.

For the specialist, there are a multitude of collectible varieties of most of the British stamps described on this page, including essays, die proofs, plate proofs, color trials, plate markings, plate numbers, control numbers, shade varieties, etc.  For details, please refer to the Stanley Gibbons Specialised Catalogue - Volume I - Queen Victoria.