For commemorative British stamps, the big event of 1953 was the coronation of Queen Elizabeth II. 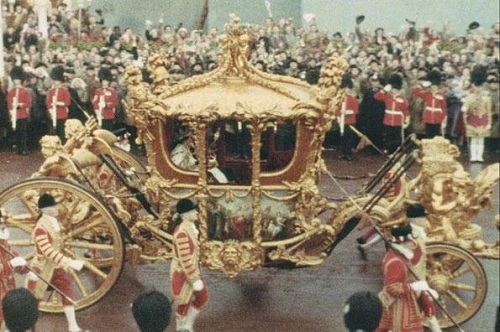 All of the commemorative British stamps of Queen Elizabeth II, issued between 1953 and 1960, have the following technical attributes in common. 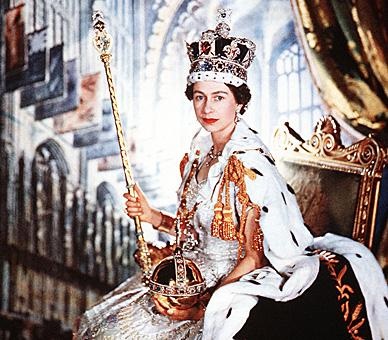 Princess Elizabeth Alexandra Mary had ascended to the throne as Queen Elizabeth II on February 6, 1952, following the death of her father, King George VI.  However, the coronation ceremony at Westminster Abbey did not take place until June 2, 1953.  This is actually done, as a matter of practice, to allow sufficient time for the period of mourning for the recently deceased monarch to pass.

The four commemorative British stamps shown above (Sc. #313-316) were issued on June 3, 1953 to celebrate the Coronation of Queen Elizabeth II.

The 2 1/2 P., 4 P., and 1 S. 6 P. denominations feature the Wilding portrait of Queen Elizabeth II, with symbolic decorations around the portrait.

It may be noticed that these stamps were issued the day after the coronation ceremony.  This is due to the fact that all the post offices in the United Kingdom were closed on Coronation Day.

These three special purpose stamps shown above (Sc. #334-336) were issued on August 1, 1957 to publicize the World Scout Jubilee Jamboree.

The stamps feature the Wilding portrait of Queen Elizabeth II and ...

The 9th World Scout Jamboree was held at Sutton Park, Birmingham, England, for 12 days during August of 1957.  The event was opened by Prince Phillip, The Duke of Edinburgh, on August 1, 1957.

This commemorative stamp was produced by taking the contemporary 4 P. definitive stamp and adding the inscriptions, "46th Parliamentary Conference" to the design.

The three commemorative stamps shown above (Sc. #338-340) were issued on July 18, 1958 to celebrate the 6th British Empire and Commonwealth Games, held at Cardiff, Wales, from July 18 through July 26.

The three designs feature the Wilding portrait of Queen Elizabeth II, with a Welsh dragon with a banner, a flag, and a laurel branch.

The two British stamps shown above (Sc. #375-376) were issued on July 7, 1960 to commemorate the 300th Anniversary of the Establishment of the General Letter Office or General Post Office.

The General Post Office was officially established by King Charles II in 1660.  The postal service eventually became known as the Royal Mail, as it was built upon the distribution systems for royal and government documents.  The office of Postmaster General was established in 1661.

On April 19, 1661, the General Post Office in London became the first post office in the World to establish the use of dated postmarks on letter mail.

The set of EUROPA stamps shown above (Sc. #377-378) was issued on September 19, 1960 to commemorate the 1st Anniversary of the Establishment of the Conference of European Postal and Telecommunications Administrations (CEPT).

All of the member states of CEPT issue EUROPA stamps of the same design every year to symbolize the cooperation among European postal administrations.

Return to Great Britain from
British Stamps - Commemoratives of 1953-1960