The first commemorative British stamps were issued in 1924, during the reign of King George V.  Some people, in the past, have considered the long set of colorful stamps issued in 1887 to be commemorative stamps, as they were issued in the year of Queen Victoria's Golden Jubilee, but they were never intended to be anything other than regular definitive letter postage stamps. 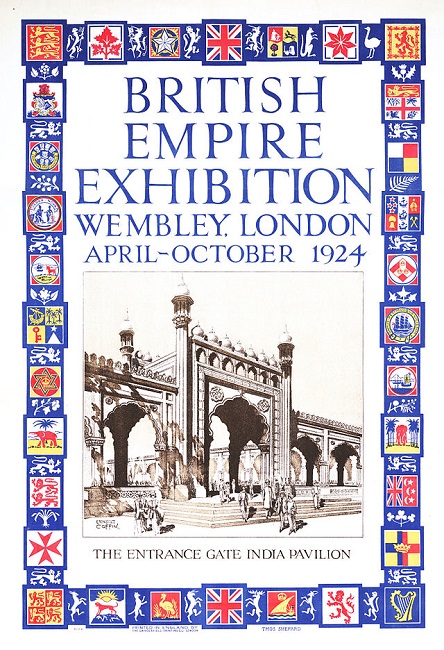 The purpose of this exhibition was to be a celebration of the empire, to raise the country's spirits after the First World War, and to promote trade and strengthen bonds with the colonies.  In 1924, the exhibition was the largest of its kind ever held in the World, and during its duration, it succeeded in attracting 27 million visitors.

The two British stamps shown above, in the top row (Sc. #185-186), were issued on April 23, 1924 for the Opening of the British Empire Exhibition at Wembley.  These stamps, inscribed 1924, were engraved, perforated 14, and printed on paper with the Multiple Crown and Roman GvR watermark.

The five commemorative stamps shown above (Sc. #205-209) were issued on May 10, 1929, the opening day of the 9th Postal Union Congress, held in London.  The congress was a meeting of the Universal Postal Union, held once every four years, and it was attended by representatives from most of the World's major postal authorities.

The £ 1 denomination was engraved, perforated 12, and printed on paper with a  Crown and Very Large Script GvR watermark.  The central design depicts "St. George Slaying the Dragon".

Today, these £ 1  denomination stamps are VERY expensive, but considering their extraordinary beauty and desirability, most serious collectors of British stamps figure out a way to buy one for their collections!

The set of four commemorative British stamps shown above (Sc. #226-229) was issued on May 7, 1935 for the Silver Jubilee of the Reign of King George V.  The stamps are photogravure, perforated 14 1/2 x 14, and they are printed on paper with the Multiple Crown and Roman GvR watermark.

A VERY RARE variety of the 2 1/2 P. denomination stamp (Sc. #229a) was printed in Prussian Blue.  These are very rarely encountered.  An example is shown above.

Return to Great Britain from
British Stamps - Commemoratives of 1924-1935