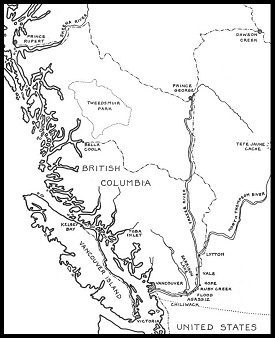 Most of what we know today as British Columbia was the New Caledonia territory of the Hudson Bay Company.  Fur trading had always been the principle activity in this area, but in 1857, gold was discovered.  Prospectors from the United States and throughout the British Empire hurriedly traveled there to seek their fortunes.  In an effort to establish political control over the new-found wealth of the mainland, the British Parliament converted the Hudson Bay Company territory to a Crown Colony on August 2, 1858, giving it the name "British Columbia".

The two Pound Sterling currency stamps shown above were issued in 1860 for use in the Crown Colonies of British Columbia AND Vancouver Island.  They are both typographed on unwatermarked paper.

The imperforate stamp was never officially placed in use in the two colonies.  It is now believed that the few known mint (without gum) examples of this stamp may possibly be proofs or maybe even reprints.

The perforated 14 stamp was used extensively in both colonies, and though a bit expensive, examples of this stamp are relatively abundant.

The four decimal currency stamps shown above were issued in 1865 for use in Vancouver Island.  They are both typographed,  and they are printed on paper with WMK 1 -- the Crown and CC watermark.

The Pound Sterling currency stamp shown above was issued on November 1, 1865 for use in British Columbia.  This stamp is typographed, perforated 14, and it is printed on paper with WMK 1 -- the Crown and CC watermark.

The new design features the Seal of British Columbia.

Between 1867 and 1869, types of the 3 P. denomination stamp of 1865 were issued in various colors, and they were all surcharged in decimal currency.

The earlier printings are perforated 14.

The later printings are perforated 12 1/2.