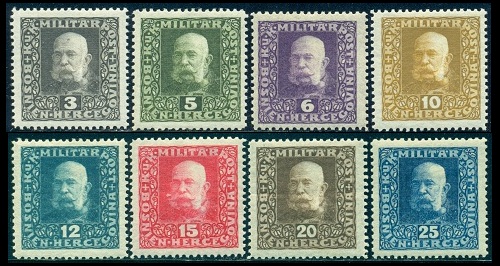 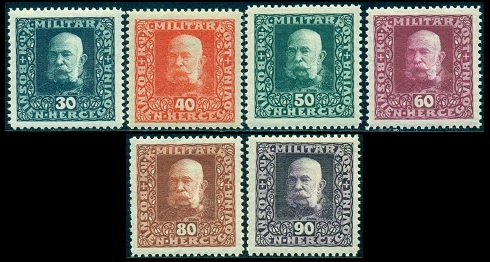 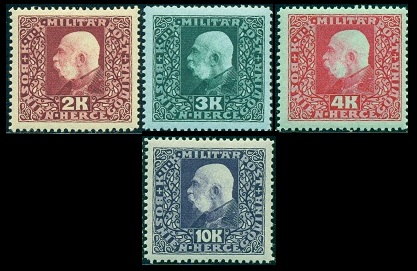 The eighteen new definitive postage stamps, shown above (Mi. #99-116, Sc. #86-104), were all issued between October 1 and October 31, 1916.  The frames are a little different than the previous definitive postage stamp issue, and the stamps are all engraved.  The Heller denominations are printed on white paper, and they feature a facing portrait of  Emperor Franz Josef I.  The Kroner denominations are printed on color toned paper, and they all feature a profile bust of the emperor.

Each denomination was sold with a 2 Heller surcharge, which went to aid wounded war veterans.  The 5 Heller depicts an invalid veteran, and the 10 Heller depicts a nurse leading a blind veteran. 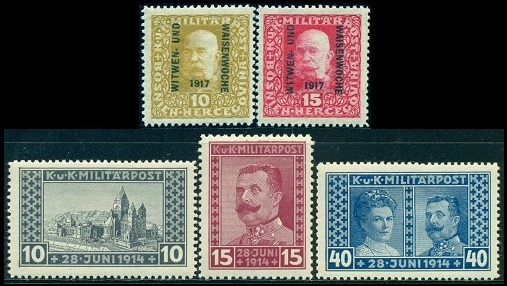 Each denomination was sold with a 2 Heller surcharge, which went to aid wounded war veterans.


The set shown above, at the bottom (Mi. #121-23, Sc. #B13-15), was issued on June 28, 1917, to commemorate the third anniversary of the assassination of Archduke Ferdinand and Archduchess Sophia.  Each of the denominations was sold with a 2 Heller surcharge, which helped to build a memorial church at Sarajevo.  They depict the design for the memorial church at Sarajevo, Archduke Francis Ferdinand, and Duchess Sophia and Archduke Francis Ferdinand.

These three stamps exist perforated 12 1/2, perforated 11 1/2, and imperforate.  None of the varieties are terribly expensive. 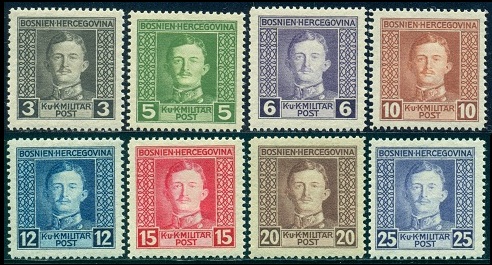 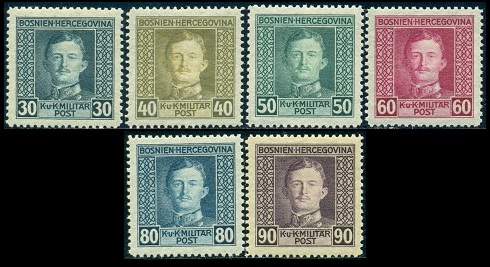 The eighteen new definitive postage stamps shown above (Mi. #124-41, Sc. #105-22) were issued for Bosnia Herzegovina on July 1, 1917.  They are all engraved and feature the portrait of the new Emperor Karl I.  The normal issue was perforated 12 1/2.  A few of the stamps are known with other perforation gauges, some of which are very expensive.

These stamps also exist imperforate, in imperforate between pairs, and in trial color proofs, none of which are prohibitively expensive. 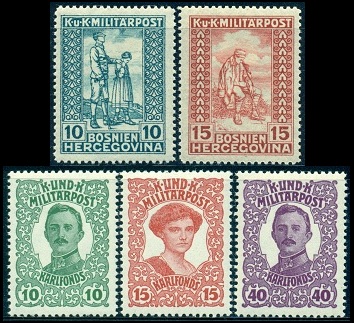 The two charity stamps shown above, at the top (Mi. #142-43, Sc. #B16-17) were issued on March 1, 1918.  Each denomination was sold with a 2 Heller surcharge, which went to aid wounded war veterans.  The designs are identical to those of the July 1915 charity issue, but the colors are different.

There are many overprint errors on these two stamps, none of which are terribly expensive. 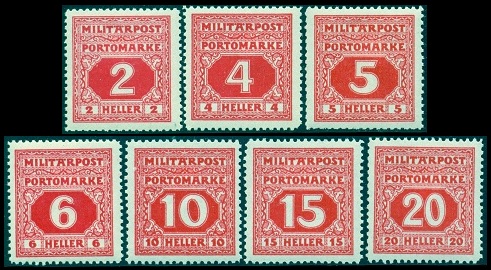 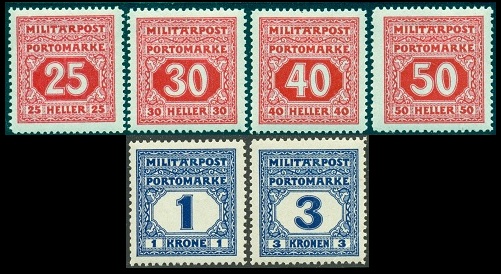 These postage due stamps also come imperforate and as trial proofs in various colors.  Refer to the specialized catalogs for details. 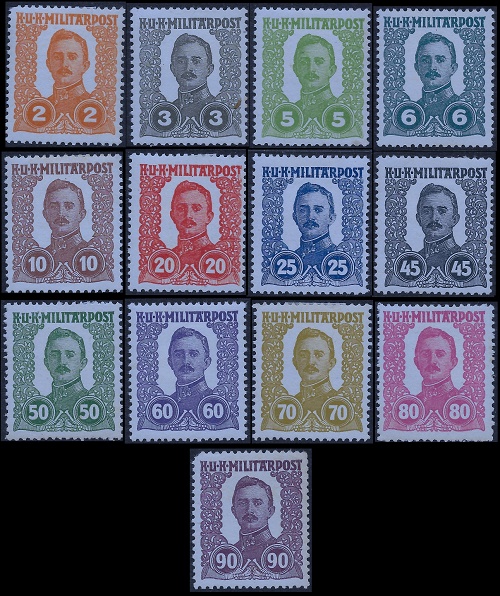 In late 1918, a new set of 13 definitive stamps were prepared for use in Bosnia Herzegovina, but they were not issued there.  They were only sold at the Vienna post office for a few days following the Armistice.

A 1 K. denomination (not shown above) was also prepared, but it was never actually issued.  It is very rare.

Return to Austrian Empire from
Bosnia Herzegovina - Issues of 1916-1918