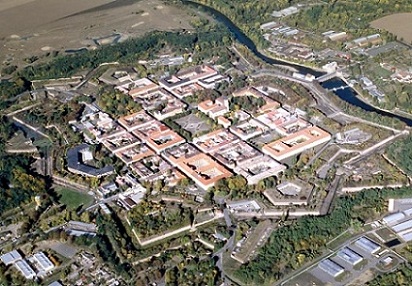 Located within Bohemia and Moravia, Theresienstadt (Czech - Terezin), was a military fortress and nearby walled garrison. The fortress was built by the Austrian Emperor Joseph II (1741-1790) during the late 18th Century, and he named it after his mother, Austrian Empress Maria Theresa (1717-1780).

The fortress was built at the junction of the Ohre and Elbe rivers, near the Sudeten Mountain Range in Bohemia. Located half way between Dresden and Prague, its purpose was to defend against any possible attack by the Prussian army of Frederick the Great. At the time, it could accommodate up to 11,000 soldiers. The anticipated attack from Prussia never materialized, and the garrison saw little use after the Austro-Prussian War.

During World War I, the fortress was used as a political prison camp. The most noteworthy prisoner was Gavrilo Princip, the assassin of Archduke Franz Ferdinand and his wife, whose act started World War I.

During World War II in the Protectorate of Bohemia and Moravia, the Gestapo used the "large fortress" of Theresienstadt as a ghetto / concentration camp for Jews from Czechoslovakia, as well as many from Germany, Austria, the Netherlands, and Denmark. More than 150,000 Jews were sent there, and although it was not an extermination camp, about 33,000 died in the ghetto, due to the appalling conditions caused by overcrowding. About 88,000 inhabitants were deported to Auschwitz and other extermination camps. At the end of the war, there were a little over 17,000 survivors.

Part of the fortification called the "small fortress", separated from the ghetto, served as the largest of the Gestapo prisons in the Protectorate of Bohemia and Moravia. It was separate and unrelated to the Jewish ghetto in the main fortress on the opposite side of the Ohre River. 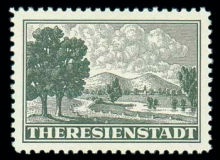 The non-denominated stamp shown above (Mi. Zulassungsmarken #1, Sc. N/L) was issued in Bohemia and Moravia in July 1943 for use on parcels being sent from the Theresienstadt concentration camp in Bohemia. The design depicts a rather pleasing looking pastoral landscape -- kind of sad and ironic, considering the incredibly horrible reality of the place that it was supposed to represent.

Imperforate proofs of this stamp also exist, either in black or in dark green. Part perforated and double-print varieties are also known. 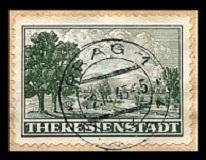 Oddly enough, quite a few of these stamps were actually used! A used example "tied to piece" is shown above.

The used price in the Michel catalog is about the same as the mint never-hinged price. The cover prices in Michel are for stamps on portions of parcel wrapping paper. 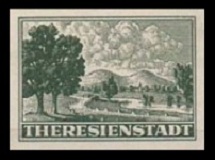 The original stamp issue is also known imperforate. One of them is shown in the image above.

The Michel catalog indicates that the imperforate stamps came from leftover printer's stocks, or what is sometimes referred to today as "printer's waste". 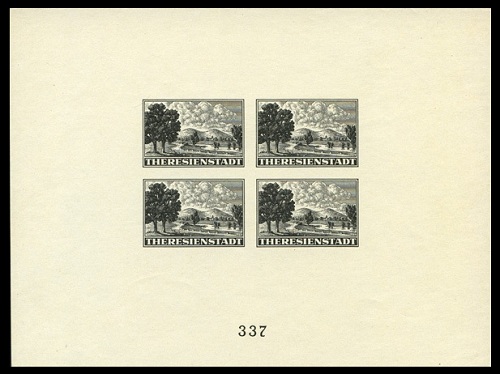 As shown above, these stamps were also printed in miniature sheets of four on high quality paper having control numbers in various colors printed on them. The miniature sheets were imperforate and without gum.

These were made specifically as propaganda material for distribution to foreign International Red Cross delegations.

Reprints and forgeries on all the types and varieties of the Theresienstadt stamp are abundant. It is strongly recommended that anyone wishing to buy any of these stamps purchase ONLY CERTIFIED or AUTHENTICATED examples. For anyone that wishes to pursue the purchase of this issue, I will provide affiliate listings from the Germany eBay below, with the majority of them being certified.


Theresienstadt was liberated on May 9, 1945 by the Soviet Army. Today, the town of Terezin (Theresienstadt) is a manufacturing center, noted for its production of furniture and knitwear. The fortress and concentration camp are still there, and they are now a historical landmark and memorial.