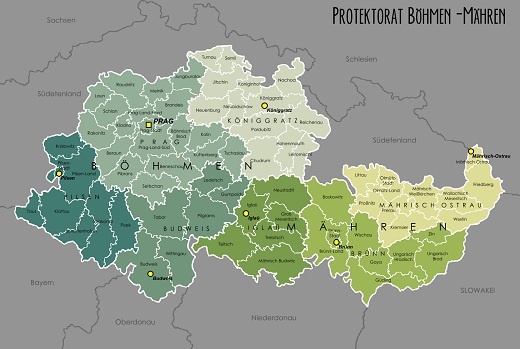 Map of the Protectorate
By: XyrsD - From: Wikipedia

The Protectorate of Bohemia and Moravia (German - Protektorat Böhmen und Mähren, Czech - Protektorát Čechy a Morava) was an ethnic Czech state formed from the central parts of Bohemia, Moravia, and Czech Silesia, in what is today the Czech Republic.

With the annexations of Austria and the Sudetenland, an ethnic German region along the northern border of Czechoslovakia, completed in late 1938, Adolph Hitler's next goal was Bohemia & Moravia. 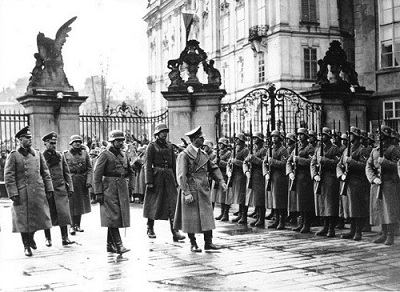 Adolph Hitler at Prague Castle
From: the Bundesarchiv via Wikipedia

For the Czechs of the Protectorate of Bohemia & Moravia, the German occupation was a period of brutal oppression, made even more painful by the memories of independence from the Austrian Empire after World War I and their short-lived Czechoslovakian democracy.

German rule was moderate during the first months of the occupation. Once World War II began in earnest though, the Third Reich adopted a more radical policy in the Protectorate. 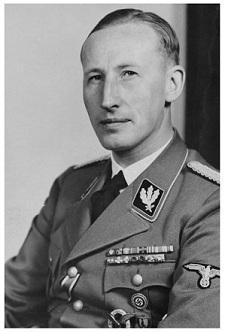 In 1941, SS officer Reinhard Heydrich (shown in the Bundesarchiv image at the right) was appointed Deputy Reichsprotektor of Bohemia and Moravia. Under his authority the Czech prime minister was arrested and executed, the Czech run government was reorganized, and all Czech cultural organizations were banned.

On June 4, 1942, Heydrich died after having been wounded in an assassination attempt. For pay-back, Heydrich's successor ordered mass arrests and executions and the complete destruction of the villages of Lidice and Ležáky.

In 1943 the German war effort was accelerated. Under the authority of the German minister of state for Bohemia & Moravia, around 350,000 Czech laborers were relocated to work in factories in Germany, and within the protectorate, all non-war-related industry was prohibited.

The eventual goal of the Germans was to eradicate the Czech nationality through assimilation, deportation, and extermination, replacing it with an ethnic German population. The Germans brought immigrant families and even school children into the Protectorate, in hopes of eventually replacing the ethnic Czech population.

Intellectuals and the middle class made up a considerable portion of the many thousands of people who passed through concentration camps.

The Jewish population of Bohemia and Moravia, was virtually annihilated. Along with other concentration camps, the fortress town of Terezín (Theresianstadt) was made into a ghetto for Jewish families. It has been estimated that over 275,000 Czechoslovakian Jews died during the war.

The extermination of the Romani population was so thorough that the Bohemian Romani language became totally extinct. Romani prisoners were sent to the Lety and Hodonín concentration camps, before being transferred to Auschwitz for extermination. 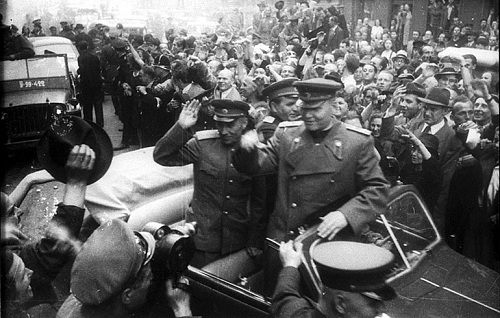 Residents of Prague Greeting
Soviet Marshal Ivan Konev in May 1945
From: Wikipedia

During the final weeks of World War II, Soviet troops overran all of Slovakia, Moravia, and most of Bohemia, including the city of Prague. U.S. forces liberated the city of Plzen and western Bohemia. Following Germany's surrender, the nation of Czechoslovakia was re-established.