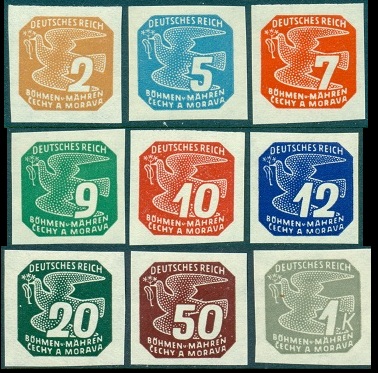 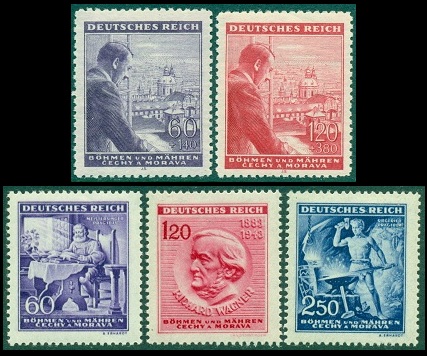 Both of the stamps depict a portrait of Hitler, standing at a window of Prague Castle, and looking out onto a panoramic view of the town of Prague. 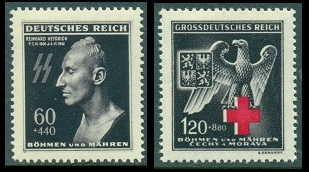 The stamp at the upper left (Mi. #131, Sc. #B20) was issued on May 28, 1943 to commemorate the First Anniversary of the Death of Reinhard Heydrich, the Reichsprotektor of Bohemia and Moravia.

The design features the SS symbol and the death mask of Heydrich.

This design also exists in a miniature sheet, containing one perforated stamp. The sheets were only distributed to people attending the funeral of Reinhard Heydrich, and they were never sold to the public. The sheets are exceedingly rare and are pretty much unobtainable. The Michel catalog value for one is €20,000.


The stamp shown at the upper right (Mi. #132, Sc. #B21) was issued on September 16 to publicize and raise money for the German Red Cross.

The stamp is printed in black, with the design featuring an eagle standard with a red cross in front of it.


Take a look at the surtax amounts on these two issues and on the following issues. At this time, the Germans REALLY started squeezing stamp collectors and Czech citizens of Bohemia and Moravia for cash to support the German war effort! The Heydrich stamp above has a postal franking value of 60 Haleru with a charity surtax of 4.40 Koruna ... thus, for someone to use this stamp to mail a postcard, they would have to pay 5.00 Koruna for the single stamp! The stamp at above right is even worse. The Red Cross stamp has a postal franking value of 1.20 Koruna, along with a surtax of 8.80 Koruna, thus, that stamp would cost the patron 10.00 Koruna at the post office.


Note: All of the stamp issues from the Red Cross issue onward are now inscribed "GROSSDEUTSCHES REICH" (Greater German State) instead of "DEUTSCHES REICH". 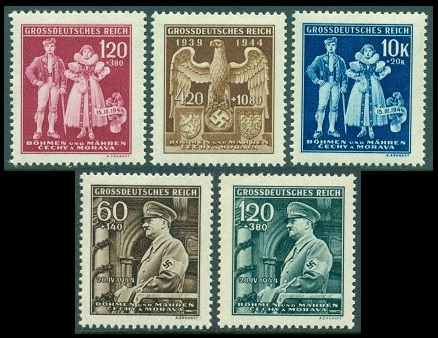 Two of the stamps depict a couple wearing native costumes, and the other stamp depicts the Nazi emblem along with the arms of Bohemia and Moravia.

A Czech stamp collector would need to pay 40.00 Koruna for these three stamps, which have a face value of 15 Koruna!

The two stamps depict a portrait of Adolph Hitler, standing at the entrance of the City Hall in Bruno. 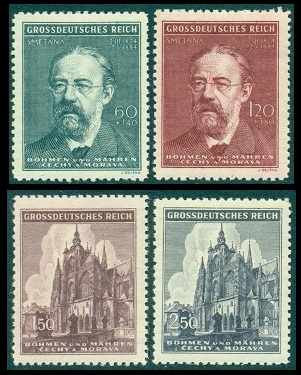 
In May 1945, Germany surrendered to the Allied forces, and the Protectorate of Bohemia and Moravia, along with the state of Slovakia, once again became the Republic of Czechoslovakia.

Return to German Occupation Stamps from
Bohemia and Moravia - 1943-1944