This period, from late 1941 through about May 1942, coincides with the appointment of SS officer Reinhard Heydrich as Reichsprotektor, the crackdown on Czech institutions, the reorganization of the Czech government, and finally the arrest and execution of the Czech prime minister.

Up through the March 1942 issue shown above, stamps of the Protectorate of Bohemia and Moravia had always been inscribed "Böhmen und Mähren" / "Čechy a Morava".

With the April 1942 Hitler's Birthday issue shown below, the stamps are now inscribed "Deutsches Reich" at the top and then "Böhmen und Mähren Čechy a Morava" in tiny letters at the bottom. All the subsequent stamp issues, through the end of the Protectorate, are inscribed in this way.

It appears that during this period, sometime around April 1942, Bohemia & Moravia went from being a sovereign Czech state, under the "protection" of the Third Reich, to being one of the states of Greater Germany!

A few weeks after the issue of the Hitler Birthday set below, the assassination of Reichsprotektor Reinhard Heydrich occurred, causing brutal reprisals and the first use of concentration camps within the Protectorate. 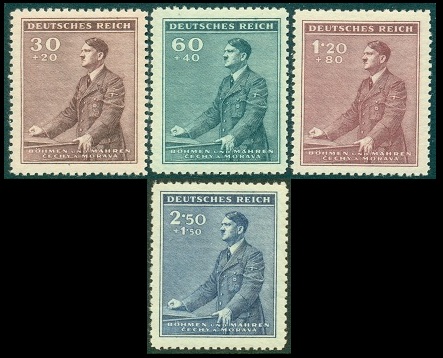 The set of four stamps shown above (Mi. 85-88, Sc. #B9-12) was issued on April 20 to celebrate the 53rd Birthday of Adolph Hitler. The stamps depict Adolph Hitler giving a speech.


One would imagine that any large German occupation state would eventually issue an extensive series of definitive postage stamps depicting the portrait of the Führer! ... well, here it is (below)! 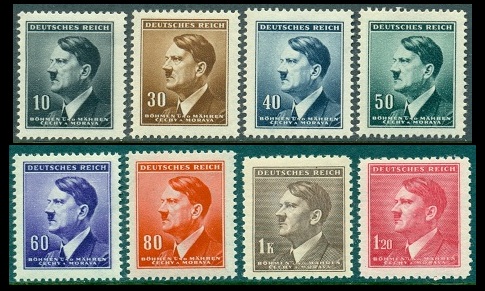 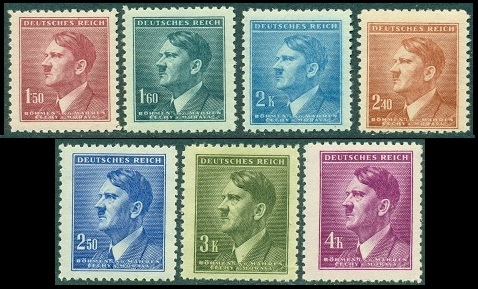 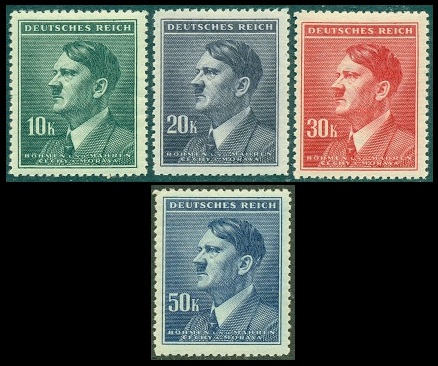 The twenty-three Bohemia and Moravia definitive postage stamps shown in the images above (Mi. #89-110, #142, Sc. #62-83, #90) were issued beginning in July 1942. They all depict the H. Hoffman portrait of Adolph Hitler. The 4.20 K. denomination shown above and inscribed "GROSSDEUTSCHES REICH" was issued in February 1945.

Incredibly, none of the definitive postage stamps in this series were ever issued, either in coils, or in booklets!

Large stocks of these issues fell into the hands of the Allied occupation forces, after the war. Many of them were defaced and / or overprinted for local usage by postal officials during the period between the surrender of Germany and the re-establishment of the Republic of Czechoslovakia.

The two stamps shown above left (Mi. #111-12, Sc. #B13-14) were issued on September 1, 1942 to publicize and raise money for the German Red Cross. Instead of having labels with the Red Cross emblem between the stamps, on this issue, the emblem was printed on the stamp above the denomination.

As with the previous Red Cross issues, the stamps depict a Red Cross worker (nurse) tending to a very sick patient (soldier).

Stamp Day is an annual event for stamp collectors, which is usually celebrated every year with a new stamp issue by most of the World's countries.

Return to German Occupation Stamps from
Bohemia and Moravia - 1942