The Protectorate of Bohemia and Moravia issued the two charity stamps shown above (Mi. #53-54, Sc. #B1-2) on June 29, 1940 to publicize and raise money for the German Red Cross. The two stamps depict a Red Cross worker tending to a wounded soldier. 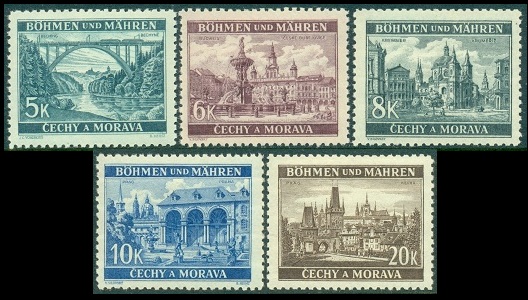 The designs in the first image above depict linden leaves and Pardubice Castle.

The designs in the second image above depict Lainsitz Bridge near Bechyne, Samson Fountain in Budweis, a view of Kromeriz, Wallenstein Palace in Prague, and a view of Prague.

These two stamps depict a Red Cross worker with a patient. The label designs are similar to that of the 1940 issue, with the exception of the date. 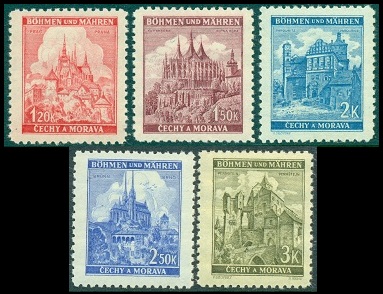 The new linden leaves denominations were engraved, as shown in the first image above, and the designs show open buds, instead of the closed buds shown on the original linden leaves issues.

The new landscape definitives shown in the scan above show designs previously used, but the new stamps are in different denominations and / or colors. They depict Prague Cathedral, St. Barbara's Church at Kutna Hora, Pardubice Castle, Bruno Cathedral, and Pernstein Castle. 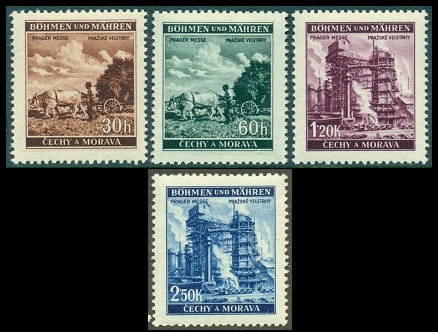 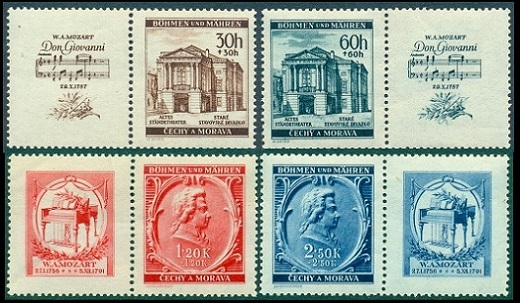 The two stamp designs depict the Old Theater in Prague and a portrait of Mozart. The adjoining labels depict two bars of Mozart's opera "Don Giovanni" and Mozart's piano.

Return to German Occupation Stamps from
Bohemia and Moravia - 1940-1941