The American and British military governments of the Bizone implemented Currency Reform in June 1948. This required that the Allied Occupation postage stamps currently in use be replaced by new ones.

The post-war economic crisis in the Allied occupation zones required the implementation of a new German currency. The old Reichsmark was replaced by the new Deutsche Mark, which would eventually become the official currency of West Germany.

The French zone was also a party to the currency reform, but they issued their own separate postage stamps for the territories under their control.

Due to political and procedural disagreements with the language of the currency reform, the Soviet zone did not participate in the reforms implemented by the Western Allies. After implementation of the reforms, the Soviet zone issued their own postage stamps, denominated in the old German currency, for the occupied territories under their control.

There was not enough time to design and print a new series of postage stamps. In order to indicate that the postage stamps were now denominated in Deutsche Marks, the existing Allied Occupation general issues were overprinted with two types of control marks. The overprinted stamps have the same attributes as the original issues, as described in the Allied Occupation Stamps - General Issues - 1946 and 1947-1948 sections. 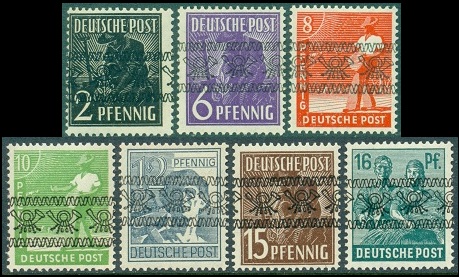 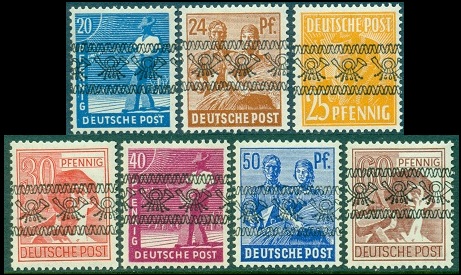 The seventeen 1947 pictorial definitive stamps shown in the image above were re-issued in June 1948 They were overprinted with the Type A control mark, which consisted of a continuous band of posthorns extending across the middle of the stamps.  They are all shown above (Mi. #36I-51I, Sc. #600-16). 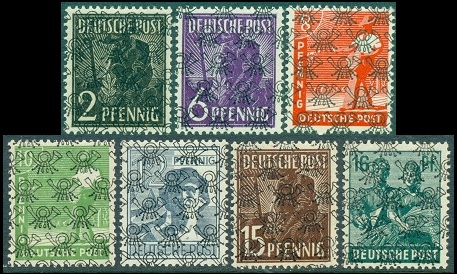 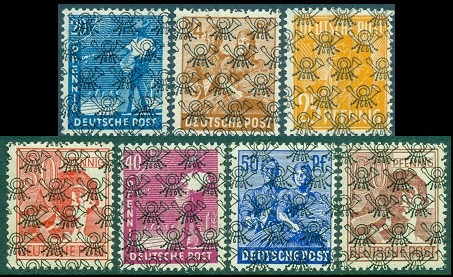 The seventeen 1947 pictorial definitive stamps shown in the image above were re-issued in June 1948 They were overprinted with the Type B control mark, which consisted of multiple posthorns covering the entire stamp.  They are all shown above (Mi. #36II-51II, Sc. #617-33).

For the specialist in Bizone currency reform stamps, there are a massive number of varieties in this issue, ranging from part-perforated and perforated stamps, to control mark types, misplaced control marks, inverted control marks, etc. A copy of the Michel Deutschland Spezial Katalog Volume II is necessary.

The Mark denominations of the 1947 Pictorial definitive stamps are also available, with the Type B control marks, but they were not regularly issued. As a result, the available ones are very scarce today. Three of them are shown in the image above (Mi. #AII/II-AIV/II, Sc. N/L). 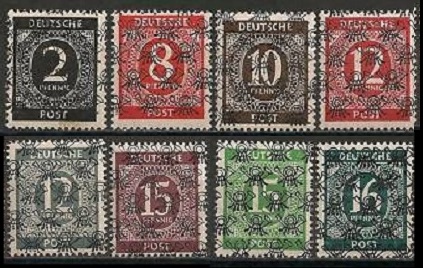 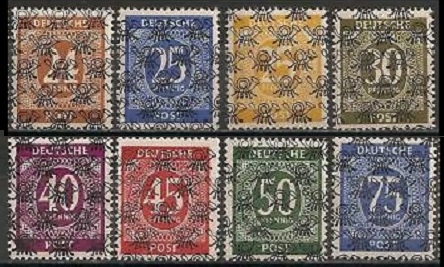 Old stocks of the Allied Occupation 1946 Numeral definitives were also used for the application of both types of the currency reform control marks. A set with the Type B control mark is shown in the scans above (Mi. #52II-58II, Sc. #593A-99).

These are much scarcer than the Pictorial definitives with the same control marks. Some of the mint and used denominations from these sets are very expensive. Because of this, counterfeit control marks and cancellations are plentiful on the Numeral issues. Caution should be used, when buying any of the more expensive stamps, especially if they are not authenticated.

There are nine other denominations from the 1946 Numeral set that were also used for the application of the control marks. These were never authorized for use in the Bizone, but they were sold through some post offices, and their use was tolerated. They are all very scarce.