Surtaxed Belgium stamps for the period 1933-1935 were issued to fund the ongoing fight against Tuberculosis, as well as various other charities.  The highlights of this period include another large set in the continuing effort for the reconstruction of the Orval Abbey, the first portrait stamps of the new King Leopold III, and a memorial set for the untimely death of his young bride, Queen Astrid. 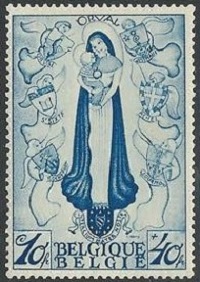 The twelve surtaxed Belgium stamps shown above were issued on October 15, 1933 (Scott #B132-143) for the continuing effort to provide additional funds for the Restoration of the Orval Abbey.

Due to the tremendously high denominations of these Belgium stamps, along with the fact that they were issued at the height of the Great Depression, they are very scarce and expensive today.

As with anything that is very valuable, forgeries of these stamps do exist.  For the collector that is willing to make a major investment in a set of these stamps, buying an authenticated set is highly recommended.

The seven surtaxed charity stamps shown above were issued on December 1, 1933 (Scott #B144-150) to benefit Belgian National Anti-Tuberculosis charities.

The common design features an allegorical representation of the Belgian Tuberculosis Society.

The seven surtaxed charity stamps shown above were issued on November 17, 1934 (Scott #B156-162) to benefit Belgian National Anti-Tuberculosis charities.

The common design features a mounted Crusader holding a shield with the Cross of Lorraine, an allusion to the "Crusade Against Tuberculosis".

The eight surtaxed Belgium stamps shown above were issued in late 1935 (Scott #B170-177) as a Memorial to Queen Consort Astrid.  The surtax on the stamps was divided among several charitable organizations.

The common design features a contemporary portrait of Queen Astrid, wearing the tiara made for her 1934 coronation.  The design is  surrounded by a black border. 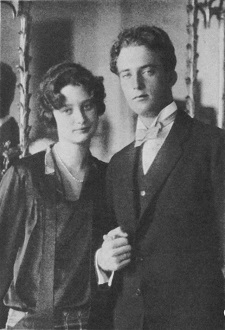 Astrid of Sweden (1905-1935) was Queen Consort of the Belgians as the spouse of King Leopold III.  She was the mother of the future Grand Duchess Consort of Luxembourg, King Baudouin I of Belgium, and King Albert II of Belgium.

Crown Prince Leopold of Belgium married Princess Astrid of Sweden in 1926.  Astrid was enthusiastically adopted by the Belgians.  The love shared by the young royal couple was evident to all, and on more than one occasion, people could see them holding hands, even during official engagements.

During August 1935, the young King Leopold III and Queen Astrid went on a private holiday to Switzerland.  On August 29, 1935, the King and Queen decided to go for a last hike in the mountains before returning home to Belgium. The convertible they were driving went off the road, down a steep slope, and then slammed into some trees near a lake.  Both the king and the queen were ejected from the car.  The queen's body collided with the trunk of a tree, and she died at the scene.  The king was injured, but he later recovered from his injuries.

The queen was deeply mourned by her husband, by the Belgians, by the Swedes, and by the Swiss.  A commemorative chapel was later built in Switzerland, at the site of the fatal crash.

Return to Belgium Stamps from
Charity Stamps of 1933-1935 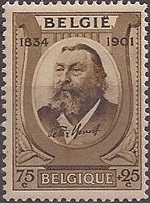 The proceeds were to raise funds for the Peter Benoit Memorial.

Peter Benoit (1834-1901) was a Belgian composer from Flanders.  His memorial is a blue-stone fountain, designed by Henry van der Velde.  It was unveiled on December 12, 1934 on the square in front of the Royal Flemish Opera House in Antwerp.

These were the first Belgium stamps to feature the portrait of  King Leopold III, who had ascended to the throne following the death of his father, King Albert I, earlier in the year.

The surtax was for the National War Veterans' Fund.

The surtax was for the Child Welfare Society.

The three surtaxed stamps shown above were issued on April 27, 1935 (Scott #B166-168) to publicize the Brussels Philatelic Exhibition.

These stamps were printed in miniature panes of 10 for purchase by stamp collectors.

The common design features a Stagecoach. 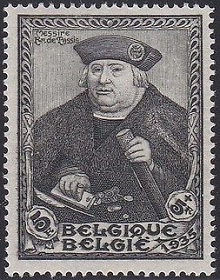 The surtaxed stamp shown above, part of a souvenir sheet, was issued May 25, 1935 (Scott #B169a) for the Brussels Philatelic Exhibition.

The design features a painting of Franz von Taxis.