Belgium stamps for the period from 1931 to 1934 included yet more definitive postage stamps, commemoratives, and a mourning issue for the passing of a beloved king.

The seven revalued stamps shown above were issued between 1931 and 1934.  On all but the first stamp, the overprint device is a precancel with the revaluation built into the overprinting device.

The ten new definitive Belgium stamps shown above were issued between 1931 and 1932.  The new designs feature the portrait of King Albert I.

The six low denomination definitive stamps shown above were issued on June 1, 1932.  The stamps are typographed and perforated 13 1/2 x 14.

The designs feature allegorical representations of a Gleaner and of Mercury.

The 75 C. denomination mourning stamp shown above was issued on March 10, 1934 as a Memorial to King Albert I.

King Albert I was an avid mountain-climber.  During February 1934, he was climbing alone on the Roche du Vieux Bon Dieu at Marche-les-Dames in the Ardennes Region of Belgium near Namur.  During the climb, he had an accident and fell 60 feet to his death.  His death shocked the World, and he was deeply mourned, both in Belgium and abroad.

The four commemorative Belgium stamps shown above were issued on July 1, 1934 to publicize the Brussels International Exhibition of 1935.

The Brussels International Exposition was held at Heysel, near Brussels, from April 27, 1935 to November 6, 1935.  The theme of the exposition was colonization, on the 50th Anniversary of the establishment of the Congo Free State.  Thirty countries participated in the exposition, which drew over twenty million visitors. 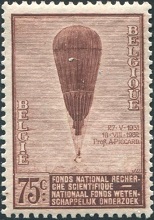 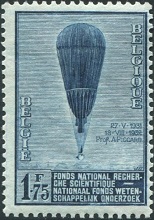 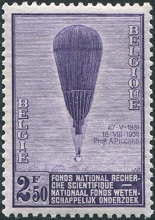 The three engraved stamps shown above were issued on November 26, 1932 (Scott #251-253) to commemorate the Stratospheric Balloon Flights of Professor Auguste Piccard.

Auguste Piccard (1884-1962) was a Swiss-born Belgian physicist.  In 1922, he became a professor of physics at the Free University of Brussels.  By 1930, he had developed an interest in ballooning, fueled by his curiosity about the navigation of the Earth's upper atmosphere.  His first balloon flight, in May 1931, took off from Germany and achieved a record altitude of 51,775 feet.  His next flight, during August 1932, took off from Switzerland and achieved a record altitude of 53,153 feet.  Piccard made a total of 27 flights, in which he set a final record altitude of 75,459 feet.

The new definitive Belgium stamp shown above, featuring the portrait of King Leopold III, was issued at the beginning of December 1934 (Scott #263).

A set of charity stamps was also issued in September 1934, featuring the portrait of King Leopold III.


Of course, with the accession of a new monarch, a brand new series of definitive postage stamps would be required.  But, that is the subject of the next webpage in this category.