Belgium stamps re-appeared in 1919.  With the devastation following World War I, it was a time of reflection, of mourning, and of the struggle for recovery.  A little background here ...

At the beginning of World War I, the German Empire asked the Kingdom of Belgium to allow them to cross Belgian territory in their attack on France.  King Albert I refused the request.  As a result, the Germans invaded and then occupied over 90% of the country for the duration of the war.

Most of the Western theater of World War I was fought in Belgium and in Northern France.  The occupations, the battles, and the after-effects were devastating to the infrastructure and the populations of these two countries.  Post-war economic hardships would be followed by the Great Depression and then the eventual onset of another world war.  The future was not very bright, during this part of the 20th Century, for many Western Europeans.

The pictorial definitive postage stamp shown above was issued on July 25, 1919.

There were two printings, with the difference being the height of the stamp design.  The earlier printing is rare.

A Perron is a stone column, decorated with a globus cruciger.  Most of them were constructed in cities belonging to the Prince-Bishopric of Liege, between 980 and 1795.  The columns symbolize local freedom and autonomy.

The fortresses around the city of Liege halted the German invasion temporarily, allowing the Belgians to construct defensive trenches.  Some of the heaviest fighting in World War I took place in this area.

The fourteen Belgium stamps shown above were issued during 1919.  These stamps were only in use for a couple years, before they were replaced by another definitive postage stamp series in 1922.

These Belgium stamps feature the famous portrait of King Albert I, wearing a military uniform and a trench-helmet that came to symbolize Belgian resistance during World War I.  On either side of the portrait are the dates 1914 and 1918.

Though they have the appearance of being definitive postage stamps, they were actually a commemorative issue, memorializing Belgium's struggle for survival during World War I.

World War I casualties for Belgium are estimated at as many as 144,000 dead, most of which were civilians, and another 45,000 wounded.  Considering the casualties equaled almost 2% of the total Belgian population, this was a tremendous loss to the country.

In December 1919, the 5 Fr. pictorial definitive design of 1915 was re-issued.  These re-issued Belgium stamps have the denomination spelled as "FRANK" instead of "FRANKEN".

This re-issue also has patriotic significance.  Furnes, in Flanders, was the center of the Belgian resistance against the Germans in World War I.  The city hall became the headquarters of Belgian troops under King Albert I, and a military hospital was also established there.  In 1920, the French President came to Furnes to award the city the Croix de Guerre with Silver Palm, the highest French military honor!

This stamp exists with the center inverted, and as such, it is extremely rare.

Termonde is a town in East Flanders.  It was almost completely destroyed, by bombing and fires, during September 1914.

Pairs of the re-valued stamp exist with one of the overprints missing.  These are actually very common and inexpensive.

During 1921, the charity stamp set for the 1920 Olympic Games was overprinted and re-valued for use as definitive postage stamps.  They are shown above. 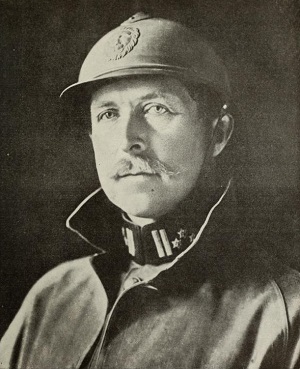