Surtaxed Belgium stamps, to raise money for charitable purposes, re-appeared near the end of World War I.  Much of the Western theater of World War I was fought on Belgian soil.  The after-effects of the war were devastating to the infrastructure and the population of Belgium.  Thus, funds to support re-construction projects, emergency services agencies, war veterans, and needy civilians were desperately needed.

The types of the 1915 regular definitive and pictorial definitive postage stamp series were re-issued as charity stamps on January 15, 1918 (Scott #B34-47).  These re-issues were in different colors than the originals, and each of the stamps was overprinted and surcharged in red.  They are all shown in the images above.

The surcharge amount was for the Belgian Red Cross.

For detailed descriptions, please see the  Issues of 1912-1920  page in this website category.

The Belgian people, during the post-war years, needed something "positive" to lift their spirits.  AND IN 1920, THEY SURE GOT IT!

About a year after the end of World War I, Antwerp (Anvers), Belgium became the host city for the 7th World (Summer) Olympic Games!

The International Olympic Committee actually chose Antwerp as the host of the 1920 Olympic Games on April 5, 1919.  Other candidates for the honor were Amsterdam and Budapest.  With the Netherlands being neutral during the war and Hungary being an enemy nation during the war, their bids were not considered by the International Olympic Committee, which was then based in France.  The aftermath of World War I also affected the 1920 Olympics, as many new nations were created from the remnants of the former German and Austro-Hungarian Empires.

The 1916 Olympic Games were awarded to Berlin, but those games were canceled, because of World War I.  Not surprisingly, Hungary, Austria, Bulgaria, Germany, and Turkey were banned from participating in the 1920 Olympic Games.  Poland and the USSR did not participate, as well, due to ongoing political and military conflicts between those two countries. 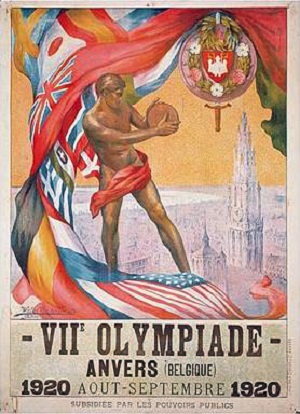 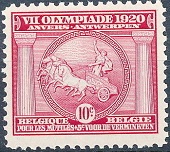 The three surtaxed Belgium stamps shown above were issued May 20, 1920 (Scott #B48-50) to publicize the 7th Olympic Games.  They are engraved and perforated 12.

The three Belgium stamp designs feature a Discus Thrower, a Racing Chariot, and a Runner, all symbols of sporting competitions in ancient times.

The surtax on each of the stamps benefited handicapped soldiers. 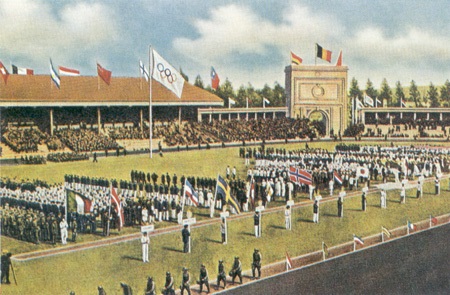 The Olympic Flag was designed by Pierre de Coubertin in 1914, and the very large white flag with the Olympic rings was first flown during the 1920 Olympic Games.  It is clearly visible in the postcard image above.  This flag, referred to today as the "Antwerp Flag", has been flown at every Olympics since then.

Following the procession and raising of the flag during the opening ceremony, the Olympic Oath has also been recited at every Olympics since then. 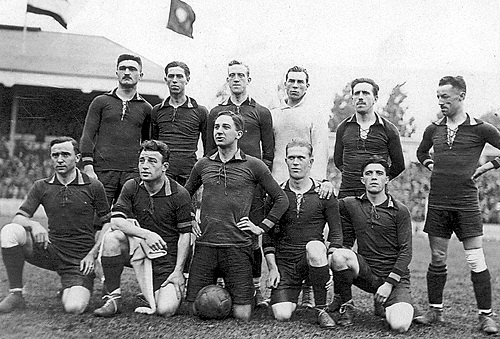 Belgium finished fifth in the total medal count for the 1920 Olympics, with the United States, Sweden, Great Britain, and Finland occupying the top four positions.

Belgium's crowning achievement was the victory of their national football (soccer) team which won the gold medal in the Olympic competition.  It was a well deserved honor for Belgian football, as it was the president of the Royal Belgium Football Association that had originally placed the bid with the International Olympic Committee back in 1912 for the games to be hosted by Belgium.

Some of the other memorable events of the 1920 Olympics were:

The surtaxed Belgium stamp shown above was issued on May 20, 1922 (Scott #B51).  The design features an allegorical representation of Asking Alms from the Crown.

The surtaxed Belgium stamp shown above was issued on July 5, 1923 (Scott #B52).  The design shows a Handicapped Veteran.

Return to Belgium Stamps from
Charity Stamps of 1918-1923