Belgium stamps issued since 1893 have the name of the country spelled out both in French and in Dutch.

Beginning in 1893, another interesting feature of the stamps of Belgium is the addition of a perforated tab at the bottom of each of them.  The tab reads "NE PAS LIVRER LE DIMANCHE" in French, and "NET BESTELLEN OP ZONDAG" in Dutch.  These phrases mean "DO NOT DELIVER ON SUNDAY".  The sender would leave the tab attached to the stamp, if they objected to their letter being delivered on Sunday.  If the sender did not object to Sunday delivery, they could indicate their preference by removing the tab from the stamp, when they affixed it to the envelope.

From 1893, until the end of the reign of King Leopold II, all the postage stamp issues were typographed and perforated 14.

The sixteen definitive postage Belgium stamps shown above were issued between 1893 and 1900.

Some of the denominations were printed on very thin transparent paper during 1904 and 1905.

The three stamps shown above were issued in 1894 for the Antwerp Exhibition.

The central design features the Arms of Antwerp.

The Exposition Internationale d'Anvers or Antwerp Exposition was a Worlds Fair held in Antwerp, Belgium, between May and November of 1894.  The fair attracted over three million visitors.

The three stamps shown above were issued in 1896 for the Brussels Exhibition.

The Brussels International Exhibition was a Worlds Fair in Brussels, Belgium, held from May through November 1897.  The colonial section of the exhibition showcased King Leopold's newest possession, the Congo Free State.  Twenty-seven countries participated, and the exhibition drew almost eight million visitors.

The 10 definitive postage Belgium stamps shown above were issued between 1905 and 1911.

King Leopold II actually died in December 1909.  Stamps with his portrait continued to be produced, until new stamps with the portrait of King Albert I were issued during 1912. 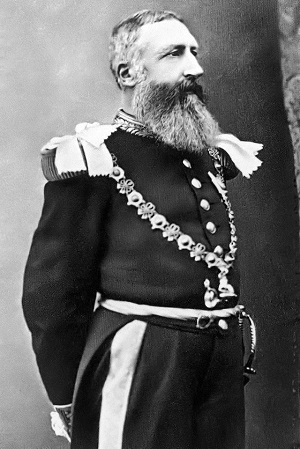