Belgium stamps were first issued in 1849, with Belgium having the distinction of being only the 9th country in the World to issue adhesive stamps for the prepayment of letter postage.  All of the postage stamps from 1849 to 1865 feature the facing portrait of King Leopold I.

The two stamps shown above were officially issued on July 1, 1849.  These stamps are known as the Epaulettes Issue.

The first Belgium stamps, like the Penny Blacks of Great Britain, bore no country name.  The rationale is that these stamps, when they were issued, were only intended for postal use within Belgium.

These stamps were engraved, imperforate, and they were printed on paper with a framed monogram watermark.

New designs, as shown above, were issued to replace the Epaulettes Issue of 1849.  These stamps are known as the Medallion Issue.

The 40 C. denomination was issued in late 1849, for the payment of postage on international mail.

The 1 C. denomination was added in 1861.  It was only valid for postage on newspapers and circulars.

Between 1849 and 1865, there were many different printings of the Medallion Issue Belgium stamps shown in the images above.  They are described below.

The stamps printed in 1849 and 1850 were engraved, imperforate, and they were printed on both thin and thick papers with a framed monogram watermark.

The stamps printed between 1851 and 1854 were engraved, imperforate, and they were printed on thin to thick wove paper or ribbed paper with an unframed monogram watermark.

The stamps printed in 1858 were engraved, imperforate, and they were printed on unwatermarked paper.  The designs are 21 mm high.

The stamps printed in 1861 were engraved, imperforate, and they were printed on unwatermarked paper.  The designs are 22 mm high.

Reprints exist of most of the Belgium stamps of 1849-1865.  When buying the expensive mint condition examples of these stamps, buying only those that have certificates of authenticity is strongly encouraged.

The safe way to go?  Collect used condition examples.  They are a LOT cheaper too! 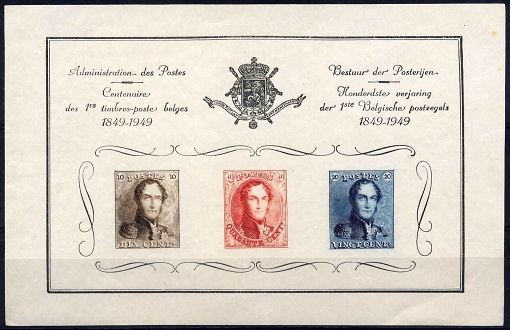 The Souvenir Sheet shown above was printed in 1949 for the 100th Anniversary of Belgian postage stamps.  It features reproductions of the three Belgium stamps issued in 1849.  The stamps were not valid for postal use, and they have black burelage printed on the back of each of the stamps.