In early 1919, Bavarian stamps were issued for the short-lived Bavarian Socialist Republic or People's Republic.

With the October Revolution in Russia in 1917 and the defeat of the German Empire in World War I in 1918, there were Communist revolts all over Germany in the aftermath.

In February 1919, there was a Communist revolt in Bavaria, and the Bavarian Socialist Republic was proclaimed on April 6, 1919. The Soviet-style republic did not last long though. The forces of the Weimar Republic intervened, and the socialist republic fell in May, having only existed about a year.

During the short period of the Bavarian Socialist Republic, twenty stamps of King Ludwig III were overprinted Volkstaat Bayern, or People's State of Bavaria. The set is shown in the images above (Mi. #116A-35A, Sc. #136-55).

For anyone that wishes to have reference examples of the high-value Peacetime Printings to use in identifying the printings of the 1914 Ludwig III Mark denominations, this particular issue is where to get them!

Inverted and double overprints exist on many of the stamps in this set. Most of them are not terribly expensive.

At a later date, imperforate examples of the Volkstaat overprint issues were made available for collectors. The imperforate set is shown in the scans above (Mi. #116B-35B, Sc. #156-75). 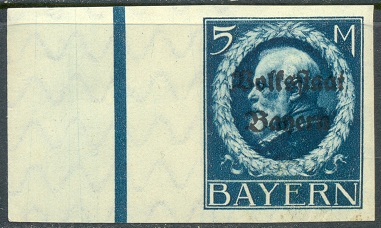 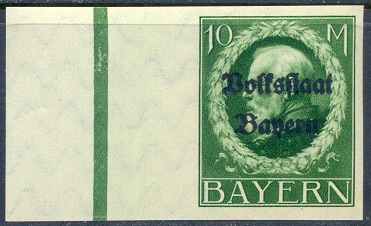 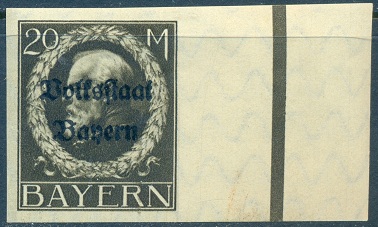 Collecting margin blocks, gutter blocks, etc. of these issues can make an impressive looking display, and in mint condition, they are not expensive at all.