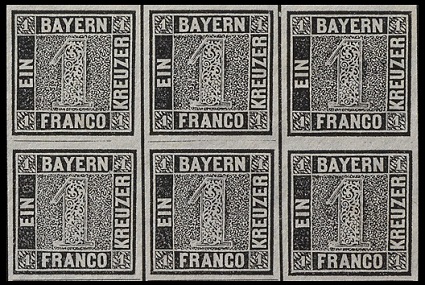 1 Kr., 3 Kr., and 6 Kr. Bavarian stamps were first issued November 1, 1849, giving the Kingdom of Bavaria the distinction of being only the 11th country in the World to issue adhesive stamps for the prepayment of letter postage.

The 1 Kr. postage stamp shown above (Mi. #1I, Sc. #1) was issued on November 1, 1849, with additional printings continuing through 1850.  This stamp is imperforate, as are all the numeral issues, and it was printed on normal paper without security threads.

Two plates were used for this 1 Kr. denomination stamp.  Their characteristics are as follows.

The stamps from Plate 1 are the commonest of the two plates.

Due to the rarity of this issue, forgeries are frequently encountered, so examples should be purchased that have either certificates or expert certification markings on them.

The two additional denominations of Bavarian stamps, the 3 Kr. (Type I - Plate 1) and the 6 Kr (Type I - Plate 1), shown above (Mi. #2I, #4I, Sc. #2-3) were also issued in November 1849. These two stamps are imperforate and are printed on paper with silk security threads, as were all the remaining numeral issues through 1862.

There are two major types. 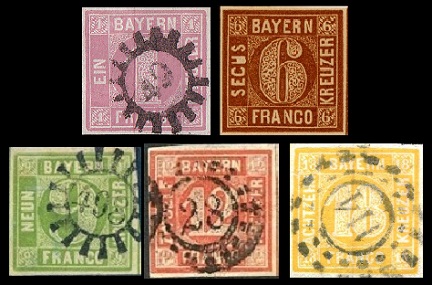 The five new numeral-type stamps shown above (Mi. #3-7, Sc. #4-8) were issued between 1850 and 1858.  Their technical attributes are the same as the previous issue, however these stamps include new colors and three new denominations. 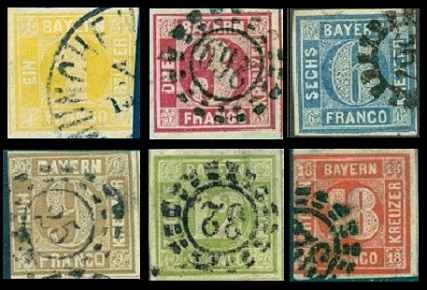 These stamps continued in use, until the numeral definitives were replaced in 1867.

On a comical note ... all the Bavarian stamps of the numeral design were printed in sheets with colored separator lines between each of the stamps. This was a great idea, in that it would allow the stamps to be evenly trimmed, when cut apart for sale at the post office. But, either the postal clerks or their patrons didn't know what the colored lines were for or didn't pay any attention to them, as you can see from the many examples shown on this web page.


The Bavarian stamps of the Numeral issues offer a wonderful opportunity for the philatelist, wishing to make a specialized study of this issue. There are a multitude of shades, plate varieties, plate faults, and cancellation varieties on all of the different stamps of this issue. They are all described in detail in the Michel Deutschland Spezial Katalog - Volume I.