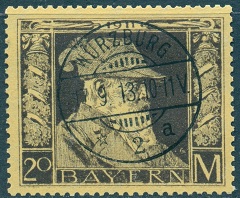 Bavarian stamps went through a major design change in 1911. At this time, Otto I was actually the King of Bavaria, and his portrait appeared on all the coins. The postage stamp issues prior to this time showed a coat of arms, instead of the King's portrait.

Between 1911 and 1912, a new series of stamps, picturing Prince Regent Luitpold, was issued in honor of the Prince's 90th birthday. This commemorative issue remained in use, as a definitive postage stamp series, until 1914, when it was replaced by those of King Ludwig III. 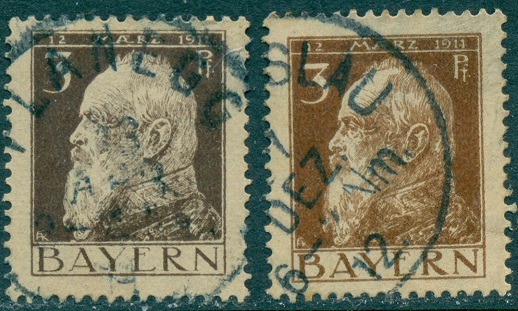 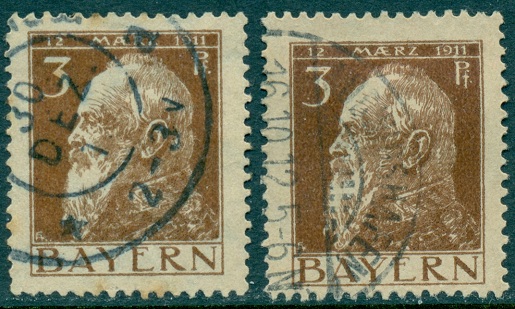 The four 3 Pf. postage stamps above, from upper left to lower right, show types I through IV. These types, which occur on the Pfennig denominations, are explained, as follows:

Type I: Inscription at top is thin and blurry. The top of the "R" in "MAERZ" is small. Middle bar of the "E" in "MAERZ" is short. The "N" of "BAYERN" is pointed at the upper left end. Type I occurs on all denominations, except the 60 Pfennig. 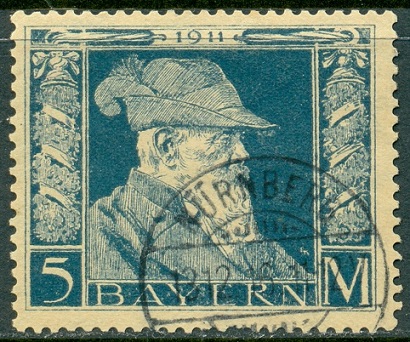 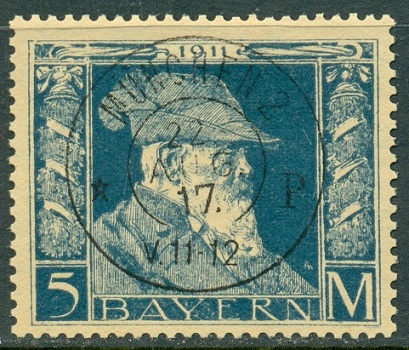 The two 5 Mark postage stamps above, from top to bottom, show types I through II. These types, which occur only on the Mark denominations, are explained, as follows:

Type I: Serif lines at the foot of the numbers "1" in "1911" are missing or are only faintly present. The "9" is thinner. The thin lines of the "N" in "BAYERN" are weak and appear to merge into white areas.

Type II: Serif lines at the foot of the numbers "1" in "1911" are strong and distinct. The "9" is thicker and all the numerals are stronger. The thin lines of the "N" in "BAYERN" are strong and well defined. They have distinct serifs and do not merge with the white areas..

The set of Bavarian stamps shown above was issued on June 10, 1911, to commemorate the 25th Anniversary of the Regency of Prince Regent Luitpold.