Bavarian stamps underwent another evolution in 1914. Prince Regent Ludwig, the son of former Prince Regent Luitpold, deposed the ailing King Otto I in November 1913 and declared himself King Ludwig III.

On the Peacetime Printings, the colors are bright and the impressions are clear.

The Peacetime Printings were produced and used from the end of March 1914 through the end of 1915, though remaining stocks of them were probably used beyond that date. The Scott Classic Catalog suggests collecting these USED, with cancellations dated before the end of December 1915, which is a good idea, as the Mark denominations of the Peacetime Printings, in USED condition, are very expensive. 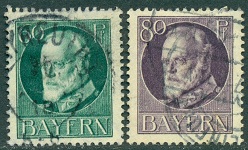 On the Wartime Printings, the colors are dull and the impressions are coarse. 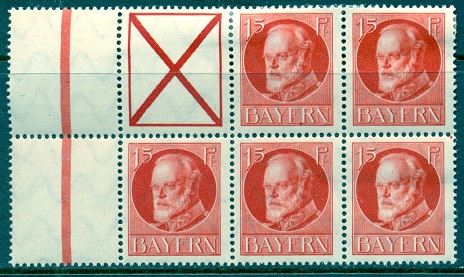 Two booklets were produced for this series.

The first booklet, produced in 1914, contained two panes of the 10 Pf. and four panes of the 5 Pf. from the Peacetime Printing.

An uncut booklet pane of 5 of the 15 Pf., with a St. Andrews Cross label is shown in the image above.

All of the stamps of the King Ludwig III design continued in use through 1919, though the monarchy actually ended in 1918.