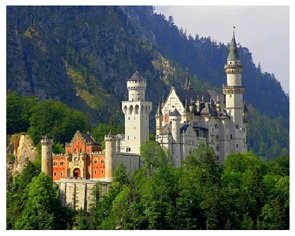 Bavarian stamps parallel the rich and sometimes turbulent history of the Kingdom from 1849 through 1920. In many ways, stamps of Bavaria reflect the political and social changes occurring during this period.

Bavaria shares international borders with Austria, the Czech Republic, and Switzerland. Neighboring states within Germany are Baden-Württemberg, Hesse, Thuringia, and Saxony. The Bavarian Alps define the border with Austria, and within the range is the highest peak in Germany, the Zugspitze at 9,718 ft.

Bavaria has existed as a state, in one form or the other, since the 6th Century, however, the Kingdom of Bavaria was not founded until 1806, in the aftermath of the Napoleonic Wars. Having not been part of the Protestant Reformation, Bavaria is predominantly a Catholic state with a distinct culture, separate from that of their Germanic counterparts in the North. Prior to the Franco-Prussian War in 1870, Bavaria had actually been an ally of the Austrian Empire and an adversary of the Kingdom of Prussia. 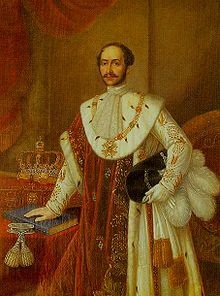 At the time the first Bavarian stamps were issued in 1849, the King of Bavaria was Maximilian II, who ruled from 1848 until 1864. He is shown in the image at the right.

Maximilian had a studious disposition, declaring on one occasion that had he not been born into a royal family, his choice would have been to become a professor. Maximilian was a man of amiable qualities and of intellectual attainments far above the average person. As king, he was hampered by constant ill health, which compelled him to travel abroad, and when he was at home, caused him to spend much of his time in the country.

During this time period, up to 1862, the classic Numeral type Bavarian stamps were current. 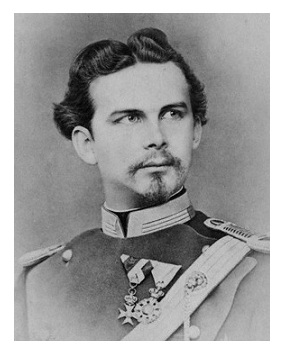 Relations with Prussia took center stage starting in 1866. During the Seven Weeks War, which began in July, Ludwig agreed, along with several other German princes, to take the side of Austria against Prussia. When the two sides negotiated the war’s settlement, the terms required that Ludwig accept a mutual defense treaty with Prussia.

This treaty placed Bavaria back on the firing line, three years later, when the Franco-Prussian War broke out. Prussia and her allies prevailed, and Prussia then completed its campaign to unify all of the German kingdoms into one German Empire under the rule of King Wilhelm I, who would now be declared Emperor. After the formation of the German Empire, Bavaria became a autonomous Kingdom within the Empire, with control over their internal government, economy, and postal system.

At this time, when the other German states were abandoning their postal systems for that of the North German Confederation and subsequently the German Empire, there was issued a brand new series of Bavarian stamps, featuring the embossed Royal Bavarian coat of arms. These Bavarian stamps continued in use until 1911. 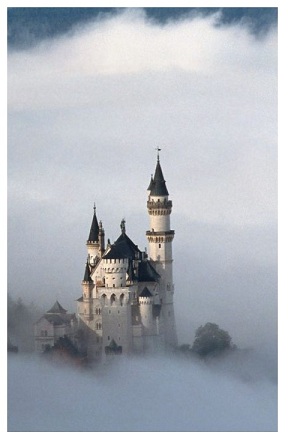 Ludwig II is sometimes referred to as "Mad King Ludwig", though the accuracy of that label has been disputed. Because Ludwig was deposed on grounds of mental illness, without any medical examination, and died a day later under mysterious circumstances, questions about the medical "diagnosis" remain controversial.

Ludwig is best known as an eccentric whose legacy is intertwined with the history of art and architecture. After the creation of the German Empire, Ludwig increasingly withdrew from politics, and he devoted himself to his personal creative projects, principally his castles, where he personally approved every detail of the architecture, decoration, and furnishing.

The most famous of these "fairy tale" castles is Neuschwanstein. Neuschwanstein Castle, or "New Swan Stone Castle", is a dramatic Romanesque fortress with Byzantine, Romanesque, and Gothic interiors. The castle is located on a rugged hill above the village of Hohenschwangau, near Füssen, in Southwestern Bavaria.

Built not only as a retreat for the king, the castle was also decorated in homage to Richard Wagner. Numerous wall paintings depict scenes from the legends Wagner used in his operas. Christian glory and chaste love figure predominantly in the iconography, and may have been intended to help Ludwig live up to his religious ideals. Neuschwanstein Castle is shown in the images at the top of this page, above right, and below. 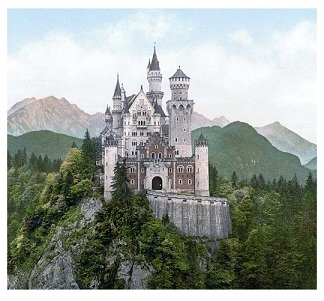 Today, with 1.3 million visitors per year, Neuschwanstein is one of the most popular tourist destinations in Europe.

The residence quarters of the King, which he first occupied in May 1884, can be toured, along with the servant's rooms, kitchens, and the monumental throne room.

Neuschwanstein Castle is a landmark well-known by many non-Germans, and it was used by Walt Disney as the inspiration for the Sleeping Beauty Castles at Disneylands around the world. 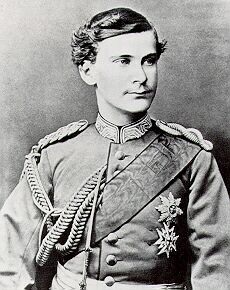 When King Wilhelm I of Prussia was proclaimed German Emperor on January 18, 1871, at the Palace of Versailles, Prince Otto represented his brother who had refused to participate.

Otto never really ruled as King, and was, by some accounts, not even aware that he had become King. It is claimed Otto suffered from severe mental illness. He was declared insane in 1875 and was kept confined in Fürstenried Palace, under medical supervision, until his death. The young King Otto I of Bavaria is shown in the photograph at the upper left. 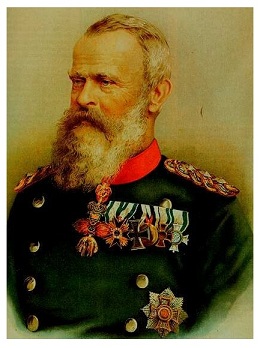 Luitpold was even accused by some people of being the murderer of his nephew, Ludwig II, but soon the decent and affable prince became one of Bavaria's most popular rulers. One of his first actions, on August 1, 1886, was to open several of the palaces of Ludwig II to the public. Luitpold maintained the regency until his own death in 1912 at the age of 91. A painting of Prince Regent Luitpold is shown at the right.

During the regency of Prince Luitpold, relations between Bavarians and Prussians remained cold, with Bavarians remembering the anti-Catholic agenda of Bismarck's "cultural wars", as well as Prussia's strategic dominance over the empire. This sort of "cold war", between Bavaria and the German Empire (Prussia), would continue well beyond the end of the German Empire, following World War I.

For the Prince Regent's 90th Birthday in 1911, a new series of Bavarian stamps were issued, featuring the profile of Prince Regent Luitpold. These stamps, along with an additional set commemorating his Silver Jubilee, remained in use until early 1914. 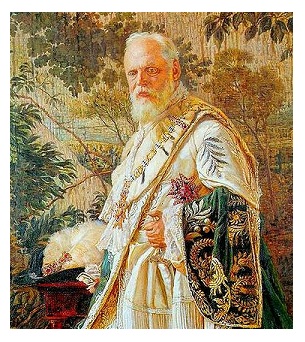 After the death of Prince Regent Luitpold, he was succeeded as regent by his eldest son, also named Ludwig. The regency lasted for 13 months, until November 1913, when the new regent declared the regency at an end, deposed the still-institutionalized King Otto, and declared himself King Ludwig III of Bavaria. His reign lasted until the end of the First World War, when monarchy in all of Germany came to an end. King Ludwig III is shown in the painting at the upper left.

During this period an extensive new series of Bavarian stamps was issued, featuring the profile portrait of King Ludwig III.

At the outbreak of World War I in 1914, Ludwig sent an official dispatch to Berlin to express Bavaria's solidarity. His hidden agenda was to maintain the balance of power between Prussia and Bavaria, within the German Empire, after a victory.

A popularly accepted account holds that within a day or two after Germany's declaration of war, Ludwig received a petition from a twenty-five year old Austrian, asking for permission to join the Bavarian Army. The petition was promptly granted, and Adolf Hitler joined the Bavarian Army, eventually settling into the 16th Reserve Bavarian Infantry Regiment, where he served the remainder of the war.

Accused of showing blind loyalty to Prussia, Ludwig became increasingly unpopular during the war. As the war drew to a close, the "German Revolution" broke out in Bavaria. On November 7, 1918, Ludwig fled from the palace in Munich with his family, being the first of the monarchs in the German Empire to be dethroned. His flight was viewed as an "abdication".

On November 7, 1918, the first anniversary of the Russian October Revolution, Kurt Eisner of the Independent Social Democratic Party of Germany (USPD) declared Bavaria a "free state". Eisner then became Minister-President of Bavaria. Though he advocated a "socialist republic", he distanced himself from the Russian Bolsheviks, declaring that his government would protect property rights. 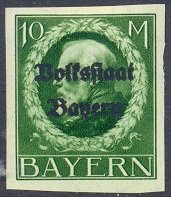 Eisner was assassinated in February 1919, ultimately leading to a Communist revolt, and the short lived Bavarian Socialist Republic was proclaimed on April 6, 1919.

After violent suppression by elements of the German Army, the Bavarian Socialist Republic fell in May 1919.

During this period, the Bavarian stamps of King Ludwig III were overprinted "Volkstaat Bayern", "People's State of Bavaria", as shown in the scan above. 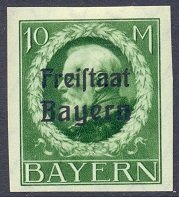 In May 1919, after the fall of the Bavarian Socialist Republic, Bavaria declared itself a "free state" in association with the new Weimar Republic.

During this period, the Bavarian stamps of King Ludwig III, as well as the Germania Issues of the Weimar Republic were overprinted "Freistaat Bayern" or "Free State of Bavaria". 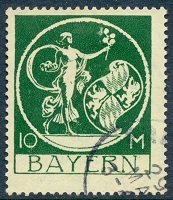 In February 1920, a new series of Bavarian stamps was issued for the Free State of Bavaria. One of the high-value denominations is shown above. 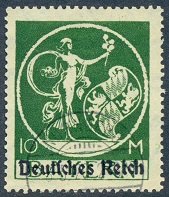 In April 1920, Bavaria became a member state of the Weimar Republic.

At this time, the current Bavarian stamps were overprinted "Deutsches Reich", for use throughout Germany, though most of the issue was used inside of Bavaria. One of the high-value definitives is shown above. Since then, regular German postage stamps have been used in Bavaria.