After January 1876, all Bavarian stamps of the embossed arms design had their denomination values changed to the currency of the German Empire, that being Pfennig and Marks. 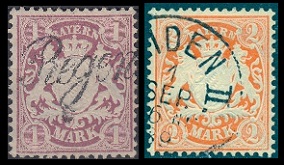 As with the previous issue, these were all printed on toned paper with the horizontal wavy lines far apart watermark (shown above at top), and they were all perforated 11 1/2. 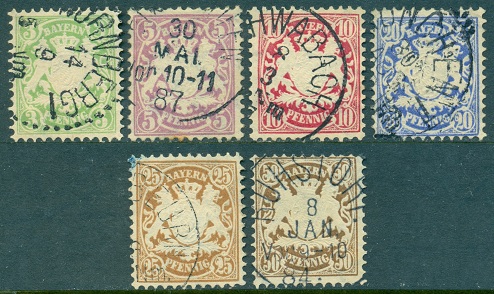 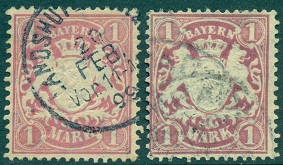 
In 1888, under the new Regency of Prince Luitpold, major changes were made to the Bavarian stamps of the embossed arms designs. The 1888 issues below are presented by paper type, and then by denomination, per Michel catalog order.

A two Mark in lilac, on toned paper, was printed around 1890, but it was never officially issued (Mi. #I, Sc. N/L). Though scarce, they are relatively affordable.

They are inexpensive in mint condition but are relatively scarce used.

In January 1911, the 5 Pf. green denomination was printed on thick, toned paper that was watermarked vertical wavy lines close together. The stamp is shown above (Mi. #75, Sc. #72). 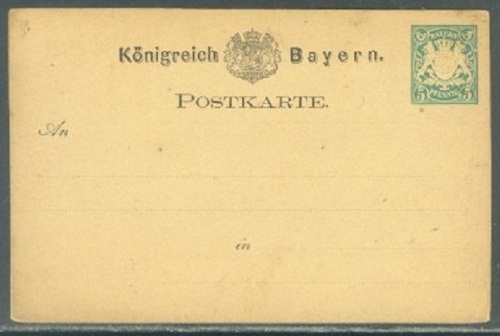 Bavarian stamps that may appear to be imperforate Embossed Arms Types on thick paper, with posthorns at the top instead of numerals, are actually cut-outs from contemporary Bavarian postal stationery. They generally follow the types and colors of the regular postage stamps, but the designs are impressed into stamped envelopes and postal cards.

They are interesting and collectible, but they are not adhesive postage stamps. A 5 Pf. postal card and a 5 Pf. used cut-out are shown above.