Bavarian stamps, from their inception, were denominated in Bavaria's own currency, the Gulden, which was equal to 60 Kreuzer.

At this time, Bavaria issued a brand new series of definitive postage stamps, featuring the embossed royal Bavarian coat of arms, with a colored frame around it. The Bavarian stamps, denominated in Kreuzer, continued in use until 1875. 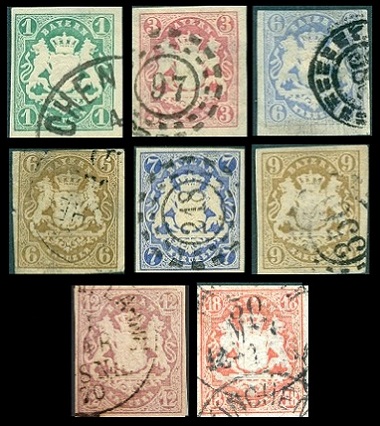 Reprints exist of the 1 Kr., 3 Kr., and 6 Kr. denominations, and they were printed on paper without security threads. They are actually much more expensive that the mint original stamp issues. 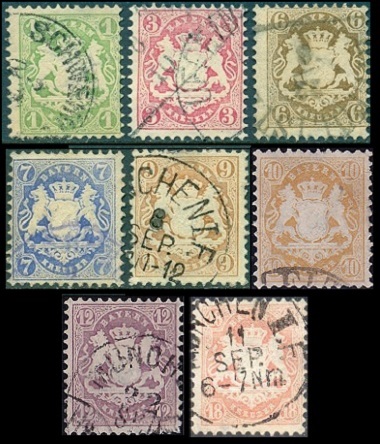 Beginning in 1870, Bavarian stamps of the embossed-arms-type design were issued in perforated panes. The stamps were of the same designs and colors as the imperforate issues, but otherwise they were very different.

The new stamps, which were perforated 11 1/2, did not have the silk security threads, and they were printed on paper with lozenge watermarks.  Two types of lozenge watermarks were used, as shown in the images above, at the top.


In respect to interstate trade, with the Bavarian Gulden currency, it was difficult to do business with some of the other German states, as many of them used the Prussian Thaler as their currency. The Bavarian Gulden was equivalent to 4/7 of a Thaler. A Bavarian 1/2 Gulden coin is shown at the top of the page.

In 1873, in order to have a uniform currency for all the German states, the German Empire established the Goldmark, or just Mark, as the official currency. The Bavarians kept their Kreuzer units of change, instead of adopting the German Pfennig, but they did adopt the German Mark as their major unit of currency. Between 1874 and 1875, the Bavarian stamps were denominated in Kreuzer, with 35 Kreuzer now equal to one German Imperial Goldmark. A Bavarian 5 Mark coin of 1876 is shown in the scan above. 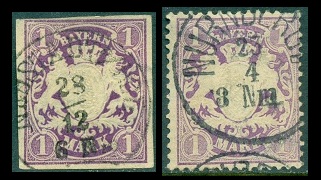 Between 1874 and 1875, the first high-denomination Bavarian stamps of the embossed-arms-type were issued. These were printed on paper with the wide lozenge watermark. 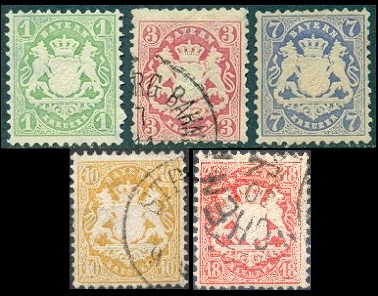 The five embossed-arms-type stamps shown above (Mi. #32-36, Sc. #33-37) were issued in July 1875.  These stamps were printed on paper with the horizontal wavy lines far apart watermark, as illustrated above.


These were the last Bavarian definitive postage stamps that were denominated in Kreuzer, and they were only in use for about six months. With the exception of the 3 Kr. denomination, used examples are very scarce.

After January 1876, all Bavarian definitive postage stamps would be denominated in the currency of the German Empire, with that being Pfennig and Marks.