Austria stamps began to re-appear in May of 1945.  One thing the new provisional government in the Soviet occupation area of Eastern Austria needed desperately was a working postal service.  At the end of the war, the one thing in abundant supply in Austria was a very large inventory of unused Third Reich definitive postage stamps, especially those featuring the portrait of Adolf Hitler, and the new occupation government made full use of them in the ensuing months!

This group is known as the First Vienna Supplemental Issue.

These are the only four denominations that were REGULARLY issued.  These overprints, and other similar obliteration markings, exist on other denominations, but they were never issued, and they are all very rare!
Please refer to the specialized catalogs for details.

The four Third Reich charity stamps shown above (Mi. #664-67, Sc. #394-97) were officially overprinted and re-valued for use as Soviet occupation definitive postage stamps at the beginning of June 1945.

This group is known as the Second Vienna Supplemental Issue. 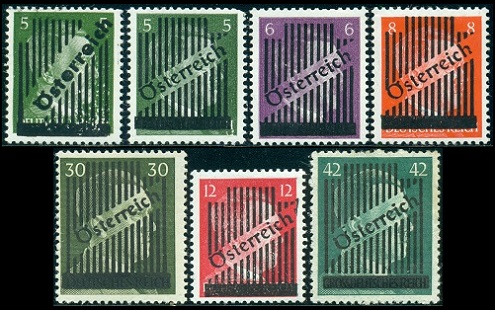 The new overprinted stamps shown above (Mi. #668-73, Sc. #398-04) were also officially issued at the beginning of June 1945.  These new stamps still have the diagonal Austria overprint, but they also feature vertical bars obliterating the profile of Adolph Hitler.

This group is known as the Third Vienna Supplemental Issue. 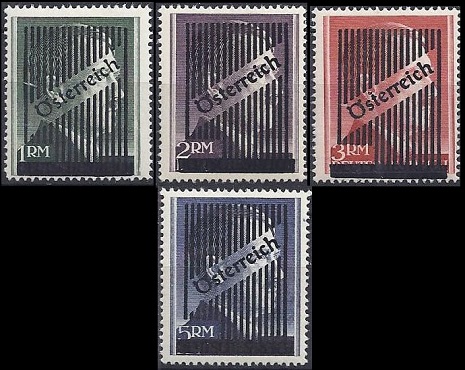 The four high-denomination overprinted stamps shown above (Mi. #Va-Vd) were printed, but they were not delivered to post offices.  However, they were sold to stamp collectors, after the Third Vienna Supplemental Issue had been placed into use.  As a result, they are readily available in the philatelic marketplace, and they are not expensive.

There are overprint errors on almost all of the obliteration bar overprinted stamps shown above.  Please see the specialized Netto and Michel catalogs for details.