Republic of Austria stamps reappeared in 1945, however the country was actually being managed by military forces of the four Allied nations. 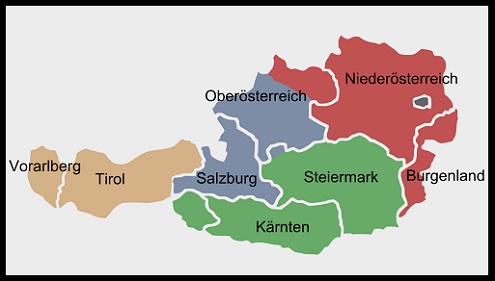 Even though the former Austria was part of the Third Reich at the end of the war, they got lucky, due to an Allied powers agreement concerning post-war occupation policies.  The Declaration of Moscow, in 1943, stated that the former Austria would be regarded as the first victim of Nazi aggression and treated as a liberated and independent country after the war.

On March 29, 1945, the Soviet army crossed the border into the former Austria, and Karl Renner, then living in Lower Austria, contacted the Soviet government.  On April 20, 1945, the Soviets asked Karl Renner to form a provisional government, and on April 27, 1945 Renner and his cabinet ministers declared Austria's independence from Germany and called for the creation of a democratic state along the lines of the First Republic of Austria.

By May 1945, French, American, and British armies had taken control of the Western portions of the former Austria.  The borders of the four Allied occupation zones were established by July 1945, with the city of Vienna being declared an international zone, as shown on the map above.  The first elections of the Second Republic of Austria were held in November 1945, with Karl Renner becoming the President and Leopold Figl becoming the Chancellor.

The three types of Austria stamps shown above were issued during May and June 1945 for use in the Soviet Occupation Zone.  These overprints were applied to existing stocks of Germany definitive postage stamps, commemorative stamps, and charity stamps.  These occupation stamps were all denominated in Pfennigs and Marks.

The diagonal overprint types shown above, at the left and at center, were used in Vienna, Lower Austria, and Burgenland.

The vertical overprint type shown above, at the right, was used in Styria.

In July 1945, a brand new set of Austria stamps, inscribed "REPUBLIK ÖSTERREICH" were issued in the Soviet Occupation Zone for use in Styria.  An example is shown above.  These stamps were also denominated in Pfennigs and Marks.

The designs of these new stamps feature an eagle with the Austrian shield.  The eagle has broken chains on its legs, symbolizing freedom from bondage, and it is holding a hammer and sickle!

This type of Austria stamp, shown above, was issued between June and November 1945 for use in the areas occupied by the Allied Military Government of Great Britain, the United States, and France.  These occupation areas included Upper Austria, Salzburg, Tyrol, Vorarlberg, and Carinthia.  These occupation stamps were all denominated in Groschen and Schillings.

Since the establishment of the Second Republic of Austria in November 1945, all Austria stamps have been inscribed "REPUBLIK ÖSTERREICH" and they have all been denominated in Austrian Groschen and Schillings.

In June 1946, the Allies loosened their dominance over the Austrian government.  The parliament was freed of Allied control, and its decisions could only be overturned by the unanimous vote of all four Allied governments.  For the next nine years, the country was gradually emancipated from Allied control, evolving from a nation under tutelage to one of complete independence.

On May 15, 1955, the leaders of the Republic of Austria and the Allied Occupation nations signed the Austrian State Treaty (STAATSVERTRAG), which pledged that Austria would maintain a policy of neutrality in perpetuity, and it took effect on July 27, 1955.  On October 25, 1955, the last remaining Allied military forces left the country.  Almost ten years after the end of World War II, Austria had once again become a sovereign nation!


Historical articles and reviews of the postage stamp issues of the Austrian Second Republic will eventually appear in the link section of the third column of this page.   The content of the page links in this category will be presented, per the Michel Catalog.

Return to Home Page from Austria
Stamps - Second Republic from 1945