The new Austria stamps appeared December 1918 with the overprint "Deutschösterreich", about four weeks after the Armistice that ended World War I. This interim state of "German Austria" was established in the German-speaking areas of the former Austro-Hungarian Empire.  The leaders of this frail state envisioned their eventual unification with the new Republic of Germany, but that would never happen.  The state of German Austria would soon evolve into the First Republic of Austria, and it would eventually survive to become a thriving European democracy, but during the post-World-War-I years and the Great Depression, life would become very difficult for the people of this new republic, both politically and economically.

The fifteen Imperial Austria stamps shown above were issued in 1918 and 1919 with the overprint "Deutschösterreich".  These stamps are all perforated 12 1/2.

The catalog attributes, for stamps that are perforated 12 1/2 and printed on normal paper, are as follows.

The catalog attributes, for stamps that are perforated 12 1/2 and printed on thick paper, are as follows. 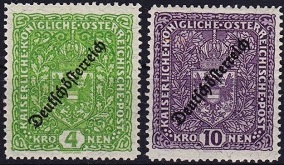 The Krone denomination Imperial Austria stamps shown above were also overprinted "Deutschösterreich", and they were issued in 1919.  These stamps exist in two sizes and with two different perforation gauges, as indicated below.   Both the Prussian Blue and the Dark Blue shades of the 2 Kr. denomination are shown above.

The catalog attributes, for stamps whose design measures 25 x 30 mm and that are perforated 12 1/2, are as follows.

The catalog attributes, for stamps whose design measures 26 x 29 mm and that are perforated 12 1/2, are as follows.

The catalog attributes, for stamps whose design measures 26 x 29 mm and that are perforated 11 1/2, are as follows.

The newspaper stamps shown above, originally issued in 1916, were re-issued in January 1919 with the "Deutschösterreich" overprint.  As with the previous newspaper stamp issue, these are all imperforate.

The 1917 special handling stamps shown above, were re-issued in January 1919 with the "Deutschösterreich" overprint.  These stamps feature the profile of Mercury, and they come in four different perforation gauges.

The re-valued special handling stamp shown above was actually issued in December 1921, but since it incorporates the "Deutschösterreich" overprint, the Michel catalog includes it here in their listings.