The first German Austria stamps appeared in December 1918.  This new post-war republic utilized the recent issues of the Austro-Hungarian Empire, overprinting them "Deutschösterreich".

The new state of Deutschösterreich, or German Austria, was created after World War I, as a temporary state in the German-speaking areas within what had been the Austro-Hungarian Empire.  The other areas of the former Austro-Hungarian Empire were broken up into separate states, based on their cultural and ethnic populations.

On November 12, 1918, the new National Assembly declared the new republic and named Karl Renner as the first Chancellor.  The new constitution declared German Austria as a democratic republic, and stated that German Austria is an integral component of the (Weimar) German Republic.  This statement reflected the feelings of many of the delegates that Austria, with the loss of 60% of its territories, was no longer viable on its own and that the only reasonable course of action was the eventual union of Austria with the Republic of Germany.

The victorious Allied forces of World War I, however, opposed the union of Austria and Germany, and the Treaty of Versailles forbade it!  In order to achieve a peaceful post-war resolution, the new Austrian government would have to change its proposed policy of unification.

On September 10, 1919, Karl Renner signed the Treaty of Saint Germain, and it was ratified by the national assembly on October 21, 1919.  According to its provisions, the new country had to change its name from "German Austria" to "Austria".  A new constitution was drafted in 1920, and the "First Republic of Austria" was born shortly thereafter.

Beginning in 1922, all issues of Austrian stamps were inscribed "Österreich", though existing supplies of stamps inscribed "Deutschösterreich" continued in use until the end of 1921. 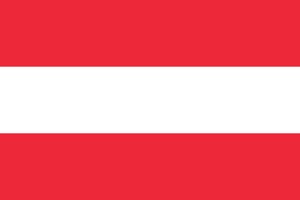 Flag of the Republic of Austria
Adopted in 1918

Collecting Austria stamps, if one stays away from the more expensive charity stamps and the souvenir sheets, can be fun, and it is not very expensive.  The many colorful stamps can lend themselves to a beautiful and educational collection display.

On the other hand, Austria stamps offer a multitude of opportunities for the philatelist.  There are many shade varieties, perforation varieties, plate varieties, plate proofs, trial color proofs, and more, some of which are quite rare.  Please refer to the specialized catalogs for details.

Historical articles and reviews of the postage stamp issues of German Austria and the Austrian First Republic will eventually appear in the link section of the third column of this page.   The stamps featured in the  content of the page links in this category will be presented in Michel Österreich-Spezial-Katalog sequence.  It is by the Michel (or Netto) chronological cataloging methodology that most European and serious Austria philatelists around the globe collect the stamps of Austria.

Catalog numbers used in the text content of the pages in this category will be from the Michel Österreich-Spezial-Katalog (2009), with cross-references to the Scott Classic Specialized Catalogue (2016), where possible.