Austria stamps issued between 1954 and 1955 continued the trend of being primarily commemorative stamps and pictorial charity stamps.

The big event of this period was that the post-war Allied occupation finally ended in 1955, enabling Austria to once again become a fully sovereign nation. 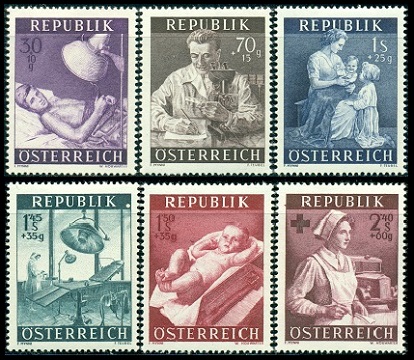 The six surtaxed pictorial Austria stamps shown above (Mi. #999-04, Sc. #B288-93) were issued on March 13, 1954 to publicize Austrian Health Organizations.  The surtax was for Social Welfare.

The design features a Cherub and the Organ of St. Florian's Monastery in Upper Austria.

The design, which is identical to that of the 1953 Christmas stamp, depicts a child admiring a Christmas Tree. 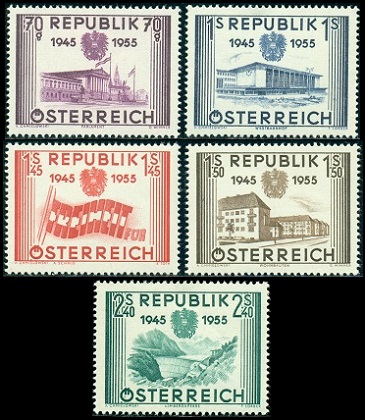 The five commemorative Austria stamps shown above (Mi. #1012-16, Sc. #599-03) were issued on April 10, 1955 to celebrate the 10th Anniversary of the Liberation of Austria and the Creation of the Second Republic.

The designs feature the Arms of Austria and .....

On May 15, 1955, the leaders of the Republic of Austria and the Allied Occupation nations signed the Austrian State Treaty (STAATSVERTRAG), which pledged that Austria would maintain a policy of neutrality in perpetuity, and the new treaty took effect on July 27, 1955.  Almost ten years after the end of World War II, Austria had once again become a sovereign nation!

The 1 S. + 25 G. denomination surtaxed stamp shown above, at the left (Mi. #1019, Sc. #B295), was issued on June 29, 1955 to publicize Returning Prisoners of War.  The surtax benefited returning prisoners of war and the families of prisoners not yet released.

The design features a representation of "industry" welcoming a returning prisoner of war.

The overprinted and surtaxed stamp shown above (Mi. #998, Sc. #B287) was issued on February 10, 1954 to raise funds for assisting Avalanche Victims.

The design depicts a young collector looking at his stamp album.