During the decade after 1959, air travel would become so inexpensive that all first class mail that was more than a short distance from the point-of-origin would be transported by commercial aircraft.  As a result, separate postage stamps for air mail service would soon become obsolete. 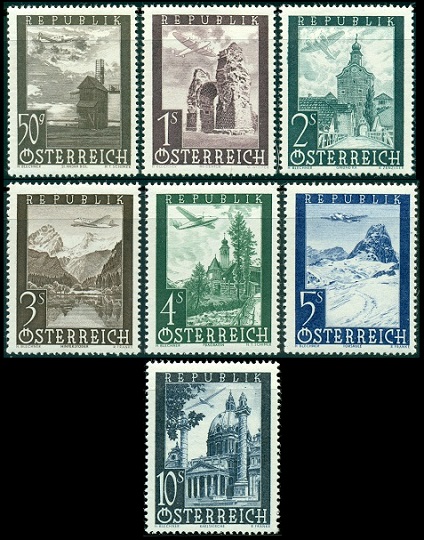 The seven definitive air mail Austria stamps shown above (Mi. #822-28, Sc. #C47-53) were issued between May and November of 1947.  These are known by Austrian philatelists as the Landscape and Landmark Air Mail Issue.

The designs feature various aircraft flying above Austrian Landscapes and / or Landmarks.  The descriptions are as follows:

Between 1946 and 1952, the State Printing House in Vienna privately produced address labels and postal stationery utilizing the images of any circulating postage stamps that the postal customer desired.

The Air Mail Printed Matter "souvenir sheet" shown above (Mi. #943-45 "Aerogramm", Sc. N/L) is one of these privately printed postal address labels.  The designs of the 1949 UPU commemorative stamp issue were used for this air mail label, and according to information I've been able to find on the internet, the stamps WERE VALID FOR POSTAGE!  Several different varieties of this sheet exist.

The 20 S. denomination, was printed on grayish paper with yellowish gum, in January 1952 and on white paper with white gum in June 1959. 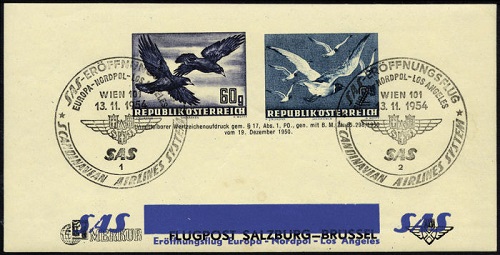 The privately produced air mail address label shown above (Mi. #955-56 "Adreßzettel", Sc. N/L) was made using impressions of the 60 C. and 2 S. denomination air mail stamps.  Though very scarce, it is only priced at 50 Euros (mint) and 65 Euros (used) in the Michel catalog.