Commemorative Austria stamps first appeared in June 1946.  These included the first of many future issues of surtaxed pictorial and / or commemorative stamps whose purpose was to raise revenue for public charities, public celebrations, and for reconstruction projects.  Austria experienced incredible devastation during World War II, and with returning prisoners of war, impoverished and homeless civilians, and the damage caused by enemy bombings, an incredible amount of money was needed to care for the citizens of Austria and to rebuild the country's infrastructure.

As proven before, in Austria and in other European countries, the surtaxed sale of postage stamps was a great way to raise revenues for these national causes.  And, this is a great era for stamp collectors.  The abundance of beautiful, engraved, pictorial stamps offers the collector an immense amount of enjoyment and education, though some of the earlier issues can be a bit expensive today. 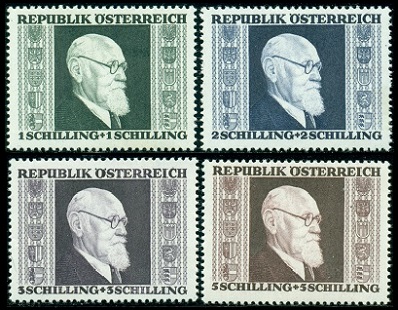 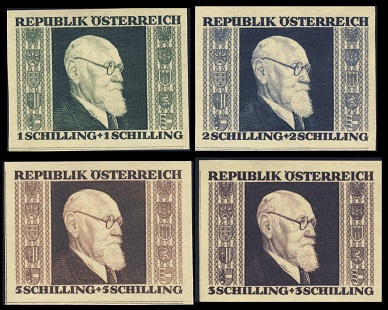 The four Karl Renner stamps were re-issued on September 5, 1946 to commemorate the 1st Anniversary of the Second Republic of Austria.  The re-issued stamps (Mi. #772B-75B, Sc. #B185a-88a) are printed on thick yellowish paper, and they are imperforate.

As far as their philatelic attributes, these stamps were NEVER ISSUED AS SOUVENIR SHEETS.  They were printed in miniature panes of eight stamps, with a decorative center ornament and decorative marginal lines.  The miniature panes measure 180 mm x 154 mm.  Most of the specialized catalogs list these as single imperforate stamps.  Some collectors prefer to buy the miniature panes, but that is not absolutely necessary. 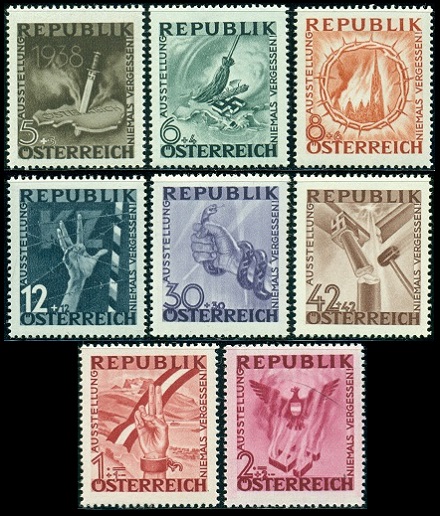 The eight surtaxed Austria stamps shown above (Mi. #776-83, Sc. #B171-78) were issued on September 16, 1946 for the Anti-Fascist Exhibition in Vienna.  The theme of the exhibition was NIEMALS VERGESSEN (NEVER FORGET)!

The surtax contributed to the funding for the exhibition.

The allegorical descriptions are as follows: 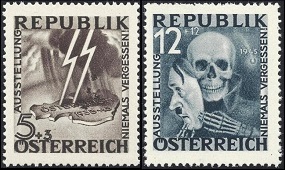 The two stamps shown above (Mi. #VI-VII, Sc. N/L) were prepared, but they were never issued.  The Allied Occupation governments felt that these designs were too graphic and incendiary, and the release of these stamps was forbidden.

The few examples that are on the philatelic market today are very rare, and when they are offered for sale, the prices can vary wildly.

They are described as follows: 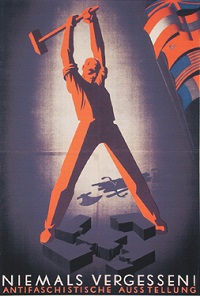 The Anti-Fascist Exhibition opened on September 14, 1946 in Vienna.  The purpose of the exhibition was to inform the Austrian public about the crimes committed by the Nazi regime.  The exhibition was attended by 840,000 visitors! 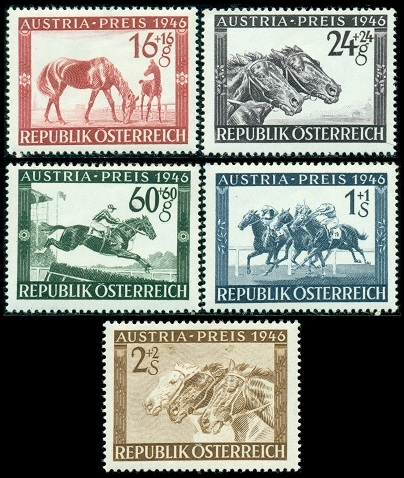 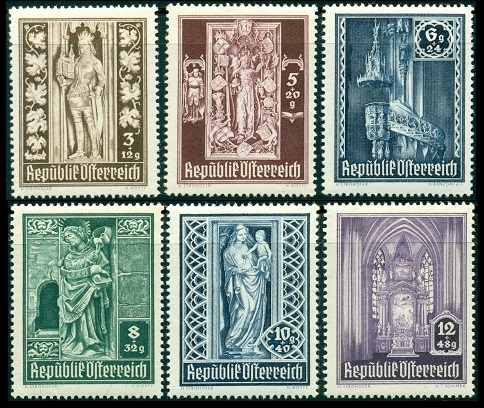 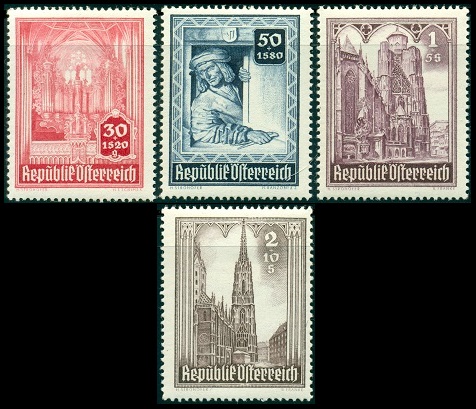 The United Nations Charter was signed by representatives from 50 nations, in San Francisco, on June 26, 1945.  The first meeting of the United Nations General Assembly took place in London on January 10, 1946.

The 12 G. denomination stamp shown above (Mi. #784, Sc. #482), was overprinted on September 26, 1946 to publicize the meeting of the Society for Cultural and Economic Relations with the USSR in Vienna.

The design features St. Ruprecht's Church in Vienna.  This Romanesque church was completed in A.D. 740, and it is the oldest surviving structure in Vienna.