For Austria stamps, the big event of 1933 was the Internationale Postwertzeichen Ausstellung (English: International Postage Stamp Exhibition) or WIPA, held in Vienna from June 24 through July 9, 1933.  The souvenir sheet issued for the exhibition has now become one of the most popular (and most expensive) rarities of modern Austrian philately.  The period from 1933 to 1934 also witnessed the appearance of a new series of pictorial definitive postage stamps, new pictorial charity stamp issues, and mourning stamps for a beloved Austrian political leader. 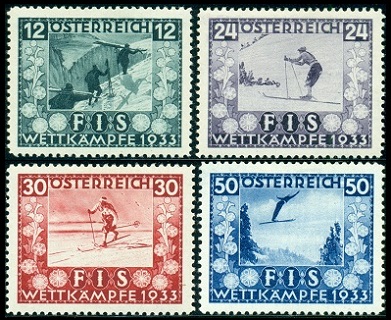 The surtaxed pictorial Austria stamps shown above (Mi. #551-54, Sc. #B106-09) were issued on January 9, 1933 to publicize the Meeting of the International Ski Federation in Innsbruck from February 8 though February 13.

The stamps were sold for double face value, with the surtax benefiting "Youth in Distress".

A third type comes from single stamps taken from the souvenir sheet shown below.  These stamps are also printed on granite paper, but they are perforated 12.

The design features a stagecoach, based on a painting by Moritz von Schwind (1804-1871).

Many unofficial "Cinderella" stamps were sold at the International Postage Stamp Exhibition, as well, including color reproductions of the prohibitively rare newspaper stamp designs of 1851-1856.  Here is a link to a superb write-up on these issues ... WIPA 1933 - Cinderellas, Post Cards, and Postal Stationery. 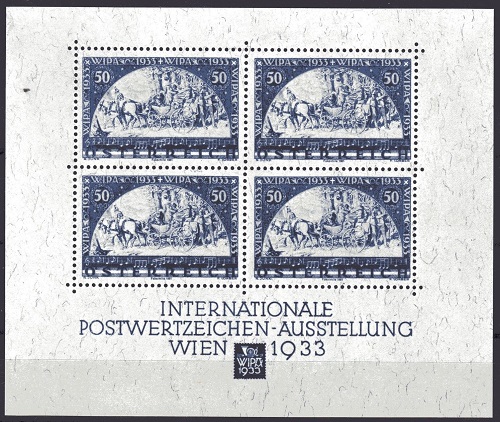 The souvenir sheet shown above (Mi. #556C (Block 1), Sc. #B111) was sold at the International Postage Stamp Exhibition (WIPA).  The souvenir sheet was printed on granite paper and it features four exhibition stamps that are perforated 12.  Only 10,000 of these souvenir sheets were printed, and today, they have become one of the great rarities of modern Austrian philately.

Low cost reprints of this souvenir sheet are available in the philatelic marketplace, however, mint original souvenir sheets can cost between € 2,000 and € 4,000 today. 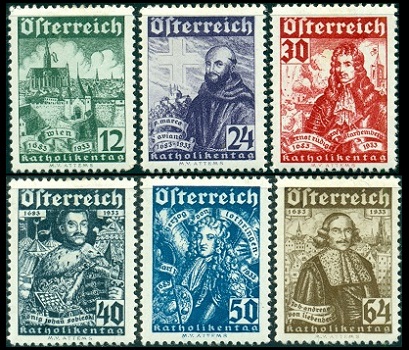 The six pictorial charity stamps shown above (Mi. #557-62, Sc. #B112-17) were issued on September 6, 1933 to commemorate the 250th Anniversary of the Deliverance of Vienna from the Turks and to publicize the meeting of the Pan-German Catholic Congress.

These Austria stamps were sold at double face value, with the proceeds benefiting Catholic charities. 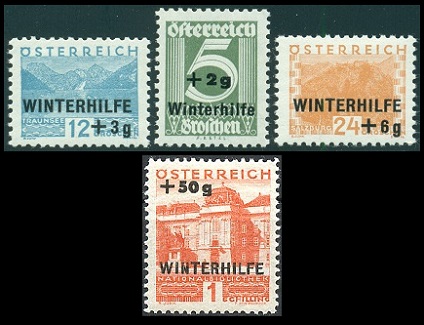 The designs of some of these small stamps are actually quite intricate, as noted in the following descriptions.

The 6 G. and 2 S. denomination definitive Austria stamps were re-engraved during 1935.  Large detail images of them are shown above. 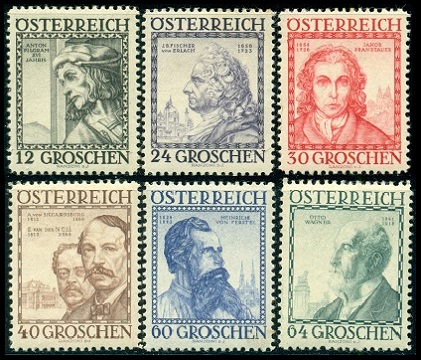 These Austria stamps were sold at double face value, with the proceeds benefiting various public charities.

These two engraved stamps are  mourning issues for Engelbert Dollfuss (1892-1934), the Chancellor of the Republic of Austria from 1932 to 1934.  Dollfuss was assassinated during a failed coup attempt by NAZI agents on July 25, 1934.

These two stamps were printed in two different design sizes, with the first being 24 x 30 mm and the second being 25 x 29 mm.  The latter one is the more expensive of the two design sizes.