Austria stamps for the period from 1923 through 1928 would include a much larger number of pictorial definitive stamps, new definitive air mail stamps, and commemorative or pictorial charity stamps.  In the aftermath of Austria's hyperinflation years, a new Austrian currency, the Austrian Schilling (100 Groschen = 1 Schilling), would also be implemented.

These stamps were sold at five times face value, with the proceeds benefiting needy artists.

The inscribed surtax on these Austria stamps went to support child welfare and anti-tuberculosis efforts.

Their symbolic designs, denoting charitable work, are as follows: 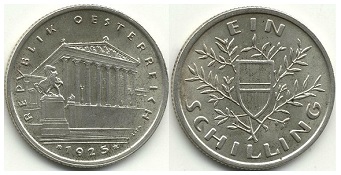 A new Austrian currency was introduced in 1924.  The Schilling (100 Groschen = 1 Schilling) was established by the Schilling Act of December 20, 1924, and it became the official currency of the Republic of Austria on March 1, 1925.  For exchange purposes, the new Schilling (silver coin) was equivalent to 10,000 Austro-Hungarian Kronen of the hyperinflation era. 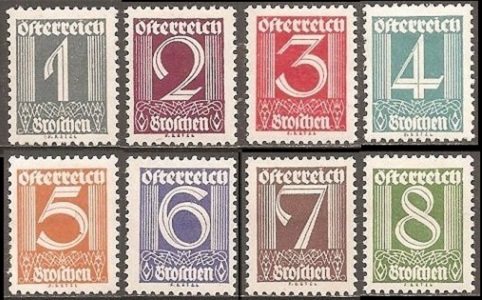 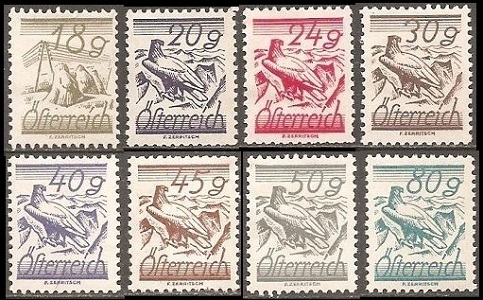 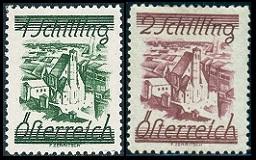 These new definitive stamps utilize four different designs with them being, in order of appearance, a denomination numeral, telegraph lines over a landscape, a white shouldered eagle, and the Church of the Mennonite Friars in Vienna.

These new definitive air mail stamps utilize two different designs with them being a plane and pilot's head and a plane passing over a crane in flight.

The six pictorial charity stamps shown above were issued on March 8, 1926, with the surtax benefiting child welfare.  The stamps are engraved and perforated 12 1/2.

These stamps are known by Austrian philatelists as the Nibelungen Issue.  The Nibelungen (Dwarves) is a story from pagan Norse / German mythology.

Richard Wagner (1813-1883) composed four operas, first performed in 1876, telling the story of the Ring of the Nibelung, also called the Ring Cycle.  The musical scores from the four operas have endured the test-of-time, and over the years, they have provided the familiar musical themes for many movies and television productions.

These four operas are:  Das Rheingold, Die Walkürie, Siegfried, and Götterdämmerung (twilight of the gods).

These six Austria stamps depict scenes from the Ring Cycle, as follows:

These Austria stamps sold for double face value, with the surtax aiding orphans of World War I and the children of crippled World War I veterans.