The first postage stamps of the Austrian Empire appeared in 1850.  These definitive postage stamps feature the Austrian Imperial Coat of Arms.  They are inscribed "KKPOST / STEMPEL", which is the abbreviated form of "Kaiserlich Konigliches Handels-Ministerium POST STEMPEL", meaning "Imperial and Royal Ministry of Commerce Postage Stamp". 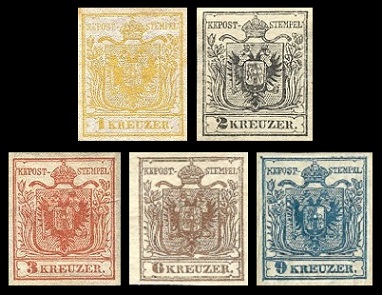 The five major-type definitive Austrian Empire stamps shown above were issued between 1850 and 1854.  The stamps are typographed and imperforate.

These stamps were printed on two different types of paper.

Per the Michel catalog, there are three major types of these stamps.  The 9 Kreuzer denomination stamp exists in Types I, II, and III.  The other denominations exist in Types I and III.

The simplified Michel / Scott catalog attributes are shown below.  These stamps are printed on mottled, handmade paper that has a script "K.K.H.M." watermark in the vertical gutter, between the panes of stamps.  However, the watermark rarely appears on individual stamps.  The shades used are from the Michel catalog.

The simplified Michel / Scott catalog attributes, for stamps that are printed on unwatermarked, machine made paper, are as follows.  The shades used below are from the Michel catalog.

Reprints of these Austrian Empire Coat of Arms stamps are plentiful.  They usually have brighter colors, and they are all Type III.  The reprints have minimal value.

These stamps were printed in sheets of 256 impressions, separated into four panes of 64 impressions.  Each pane has 60 stamps and four blank positions with St. Andrew's Cross printed on them. These four positions are at the bottom right hand corner of each pane.

Proofs, from 1849, exist in various colors, and they are denominated as 6 Kreuzer and 1 Gulden values. They are all VERY RARE. The proofs have "STAMPEL" in the legend at the top of the stamp, instead of "STEMPEL", which appeared on the regularly issued stamps.

In 1852, separation experiments were made with these Austrian Empire stamps. The experimental stamps were line-perforated 14 and all known examples were used at Tokay (Hungary). The 3 Kr., 6 Kr., and 9 Kr. denominations are the commonest.  The example (on cover) shown above, at the left (Mi. #3XC), is from a 2001 Robert Siegel Auction sale, where it sold for $10,000.00.

A 12 Kr. stamp of the Austrian Empire arms design, in blue, was prepared but never issued.   All known examples are canceled, either by a pen stroke or by a script "FRANCO".  They are exceedingly rare.  The example shown above, at the right (Mi. #I), is from the 2016 Felzmann Auction sale in Dusseldorf, Germany, where it sold for 95,000 Euros. 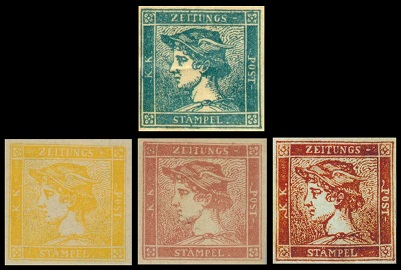 The four Austrian Empire newspaper stamps shown above were issued between 1851 and 1856.  They are typographed on unwatermarked, machine-made paper, and they are imperforate.

The common design features the left-facing profile of Mercury.

There are two types.

The Michel / Scott catalog attributes are as follows.

The blue (0.6 K.) stamp, at the top of the image shown directly above, is the only one that is actually collectible.  Though a bit costly, authentic, used examples of this stamp are relatively common, and they are readily available in the philatelic marketplace.

The three stamps, at the bottom of the image shown directly above, are rarely attainable, and they are prohibitively expensive.  Reprints and forgeries of them are plentiful and inexpensive, and these are what reside in most modern-day Austria collections.