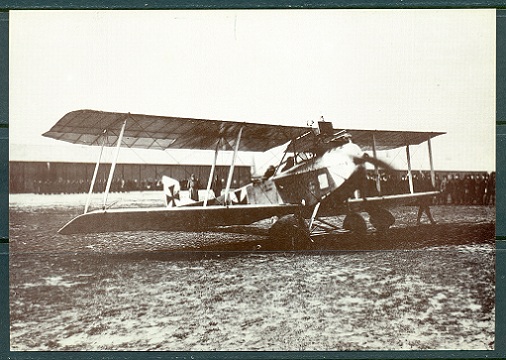 The postcard above depicts an Austrian Empire aircraft used for military mail courier flights from Vienna to Kiev, which began around March 20, 1918.

The card pictures a Hansa-Brandenburg C.I, which was a 2-seat, armed, single-engine reconnaissance biplane designed by Ernst Heinkel, who worked at that time for the parent company in Germany. The C.I served in the Imperial and Royal Aviation Troops in visual and photographic reconnaissance, artillery observation, and light bombing duties from the early spring of 1916 until the end of World War I in October 1918.

The three stamps, shown above, were the first airmail postage stamp issues of the Austrian Empire. The stamps were issued during 1918 for the military mail courier route between Vienna, Krakow, Lvov, and Kiev, which began on March 31, 1918. The German and Austrian army headquarters on the Eastern Front were located in Kiev.

This military mail showed that regular airmail deliveries were feasible, even during wartime. Many philatelists consider this regular mail delivery, with airplanes, to be the actual beginning of airmail postal history.

The Austrian empire utilized three of the high value denominations of the 1916 Arms definitive postage stamp series, with the stamps being printed in changed colors from those of the originals. The three stamps were overprinted "FLUGPOST" and the two lower values had additional surcharges.

The catalog attributes, for stamps printed on grayish paper, whose design measures 25 x 30 mm, and that are perforated 12 1/2, are as follows.

The catalog attributes, for stamps printed on grayish paper, whose design measures 25 x 30 mm, and that are perforated 11 1/2, are as follows.

The catalog attributes, for stamps printed on white paper, whose design measures 26 x 29 mm, and that are perforated 12 1/2, are as follows.

The three stamps exist imperforate, and as proofs, both with and without the overprints / surcharges. 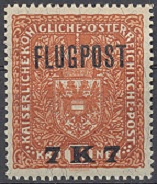 This un-issued stamp also exists as a proof, without the overprint and surcharge, both perforated 12 and imperforate.