Designs similar to the issues of 1860 to 1864 were also issued for use in Lombardy and Venetia, but they are all denominated in SOLDI, instead of KREUZER, at the top of the oval. 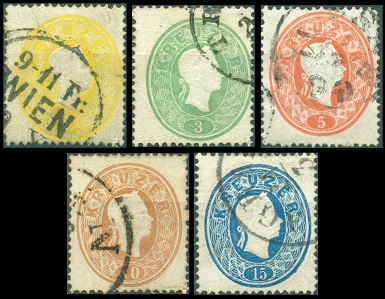 The five definitive Austrian Empire stamps shown above were issued during December 1860.  These stamps are perforated 14.

The common design features colored oval frames, along with the embossed right-facing profile of Emperor Franz Josef I.

Government reprints of these stamps were made for collectors, between 1866 and 1887. These mint condition reprints exist in five different printings. Some are actually much more expensive than the original stamps, but most of them are relatively affordable. The perforation gauges of the reprints range from 9 to 13 1/2. There are also imperforate reprints of the 2 Kr. and 3 Kr. denominations. 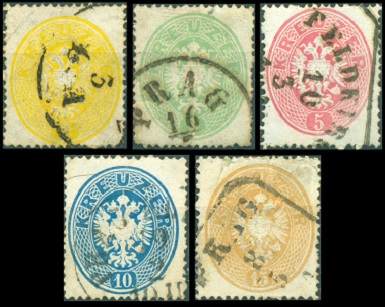 The five re-designed definitive Austrian Empire stamps shown above were issued on July 1, 1863.  These stamps are perforated 14.

The common design features colored oval frames, along with the embossed Austrian Imperial Coat of Arms. 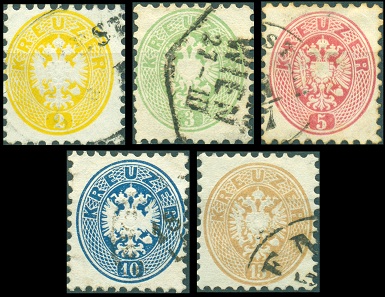 The five Coat-of-arms-type definitive Austrian Empire stamps of 1863 shown above were re-issued in 1863 and 1864.  These re-issued stamps are perforated 9 1/2.  Stamps printed after July 1864 were the first ones to use paper with the "BRIEF-MARKEN" press-sheet watermark, though about 80% of the stamps in the press-sheets show no trace of a watermark.

Other collectible varieties of this 1863-1864 issue include red, blue, violet, green, and orange cancellations, Lombardy-Venetia cancellations, and stamps postmarked at Austrian Imperial post offices in the Turkish Empire.

Government reprints of the Coat of Arms issues were made for collectors, between 1884 and 1894. These mint condition reprints exist in four different printings, and they are inexpensive. The reprints are perforated 10 1/2, 11 1/2, 13 and 13 1/2. There are also imperforate reprints of the 2 Kr. and 3 Kr. denominations.

Used examples of most of the oval definitive issues of 1860 to 1864 are relatively inexpensive, and they can provide the basis for a very attractive Austrian Empire postmark collection. 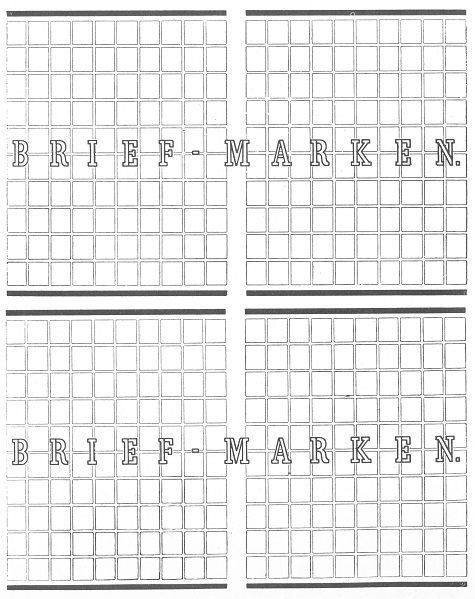 Beginning in July 1864, the paper used to print Austrian stamps was watermarked "BRIEF-MARKEN", in double-lined capitals, across the middle of the two horizontal panes of each press-sheet.  The letters are very large, and presuming proper alignment, the portions of the letters appear on between eighteen or twenty horizontal positions of each pane of stamps.  Of course, the location of the paper watermark can be variable, (up, down, left, or right), depending on how the paper was aligned on the printing plate.

Though it is understood that the panes of stamps were "watermarked", in reality, eighty or more of the horizontal positions on each of the panes (80% or more) will be "unwatermarked"!

Stamps showing portions of the watermark letters are scarce, and they are in high demand!  They are valued at considerably more than the same stamps that do not show any watermark.

The 1863 newspaper stamp shown at the bottom of column two has a very similar type of press-sheet watermark.  However, the watermark on the newspaper stamps reads "ZEITUNGS-MARKEN".