The first stamps of the Austrian Empire to feature the portrait of the emperor appeared between 1858 and 1859.  Emperor Franz Josef I had ascended to the imperial throne in 1848, at the age of 18, so when the postage stamp series of 1858-1859 was first produced, the Austrian Emperor was only 28 years old.  Thus, the portrait appearing on the stamps is that of a very young man.

These newly designed definitive postage stamps were also the first ones that were perforated, enabling the easy separation of the individual stamps in a pane. 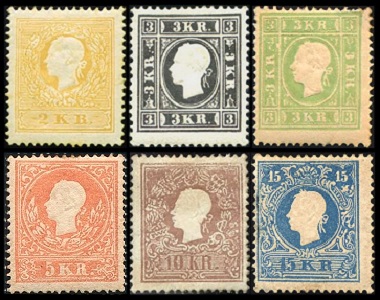 The six major-type definitive Austrian Empire stamps shown above were issued between 1858 and 1859.  The stamps are embossed on unwatermarked paper, and they are perforated 14 1/2.

The common design features colored frames of various types, along with the colorless left-facing profile of Emperor Franz Josef I.

These new stamps were produced in two types.  The attributes of the loops of the bow at the back of the head are illustrated by the two images directly above.

The simplified Michel / Scott catalog attributes, for stamps that are Type I, are as follows.  The shades used below are from the Michel catalog.

The simplified Michel / Scott catalog attributes, for stamps that are Type II, are as follows.  The shades used below are from the Michel catalog.

Government reprints of these issues were made for collectors, between 1866 and 1894. These mint condition reprints exist in five different printings, and most of them are very inexpensive. The reprints are all Type II, and they are perforated 10 1/2, 11, 12, 12 1/2, and 13.

These two newspaper stamps are not really as scarce as the catalog prices would lead one to believe.  Many moderately-priced used examples are available on the internet.