Stamps of French Andorra and Spanish Andorra
Europa Issues of 1972

Andorra stamps reflect the rather interesting stature of this tiny "principality", located in the Eastern Pyrenees Mountains, between Spain and France.  With only 180 square miles in area and a population of about 85,000 (5,000 in 1900), Andorra is the sixth-smallest nation in Europe.  The nation is located in very mountainous terrain, having an Alpine climate.  The official language is Catalan, though Spanish, Portuguese, and French are also spoken by significant percentages of the population.

Officially, the nation is called the Principality of the Valleys of Andorra.  It is called a principality, as it is technically a monarchy, jointly administrated by two "co-princes".  Today, Andorra is an internally self-governing nation, with its own parliament, called the "Council General", however the heads-of-state are the Spanish Bishop of Urgell and the President of France.

The Count of Urgell gave the Andorran valleys to the Diocese of Urgell in 988, thus the Bishop of Urgell is actually the "owner or prince" of Andorra.  In order to maintain their territorial integrity though, Andorra needed armed protection from external aggressors.  The Principality of Andorra was created in 1278, by the provisions of a treaty providing that dual sovereignty be established over the territory by the Spanish Bishop of Urgell and the French monarchy.  The modern nation of Andorra does maintain its own small army, but it exists basically for ceremonial purposes.

Before 1928, Andorrans sent their letters and packages from post offices across the border in Spain or France, using the postage stamps of those countries.  Since 1931, the postage stamps of Andorra have been issued by both the Spanish and the French administrations, and, before the Euro appeared at the beginning of the 21st Century, the Spanish Peseta and the French Franc circulated as the dual currencies of Andorra. 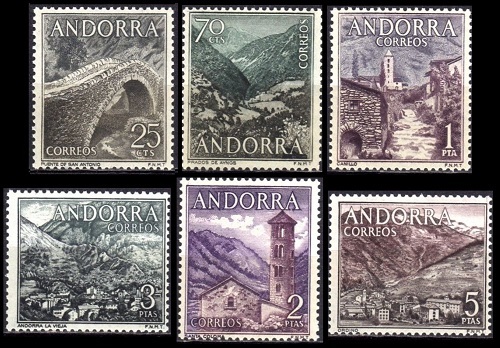 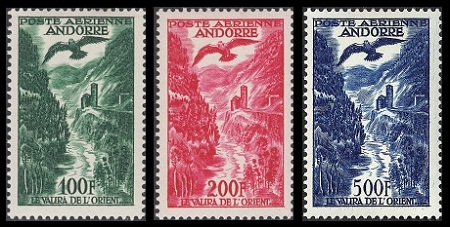 As far as stamps for supplemental fees, very few of them have been issued for Andorra.