Beginning in February 1946 and continuing through June 1948, Allied occupation stamps were issued for general usage throughout the American, British, and Soviet occupation zones. During this period, the French occupation zone issued their own stamps.

Occupation postage stamps, other than those of the French Zone, issued in 1945 or after June 1948, will be found in the Bizone (American and British Zones) or the Soviet Zone sections.

These occupation general issues, in most of the major catalogs, follow right after the last of the Germany - Third Reich catalog listings. 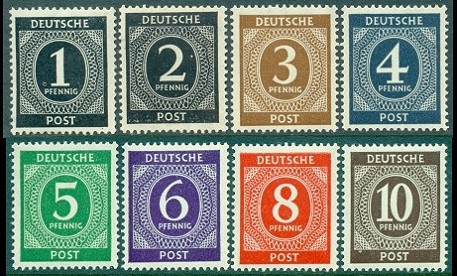 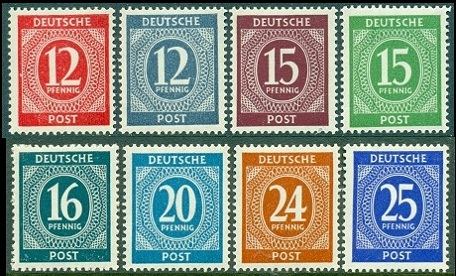 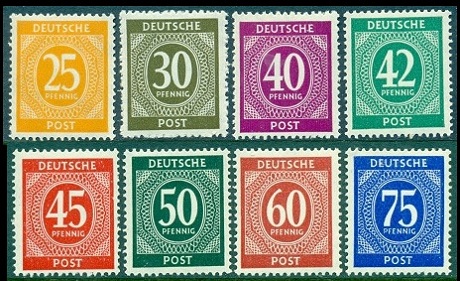 The twenty-seven definitive stamps shown in the images above (Mi. 911-37, Sc. #530-56) were all issued between February and May 1946. They are typographed on white paper with a multiple DEUTSCHEPOST watermark.

The geometric designs feature an oval in the center, with a denomination numeral, and the denomination name spelled-out below it. The stamps are all inscribed "DEUTSCHE" and "POST" at the top and bottom. 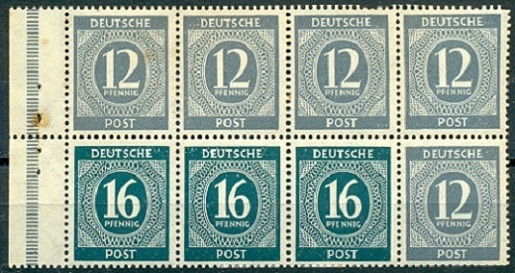 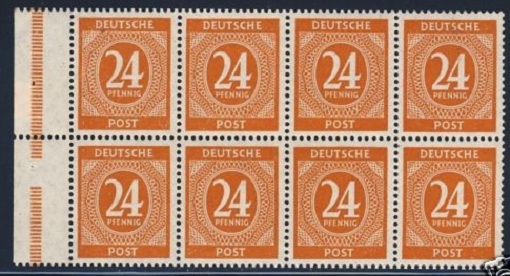 Scott lists the first pane, but not the second one. Michel lists both of the panes, but the 24 Pf. one (HBL-124) is priced very cheap -- at 1 Euro. This is due to the fact that unless one has an unexploded booklet containing both panes, the 24 Pf. pane is identical to a left-margin block of eight of the 24 Pf. sheet stamp.

Though each of the two souvenir sheets only contains 84 Pf. in postage, they sold for 5 Reichsmarks. The 4.16 RM surtax provided aid for war refugees and the elderly.