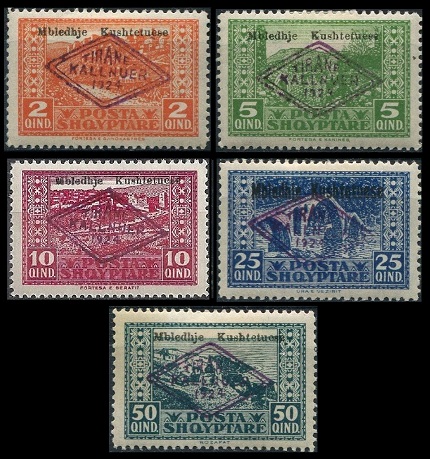 The five overprinted pictorial definitive stamps of 1922 shown above (Sc. #158-162) were issued in January 1924 to celebrate the Opening of the Constitutional Assembly.

The overprint at the top of each stamp is "Mbledhje Kushtetuese" or "Constitutional Assembly".  The diamond-shaped overprint on each stamp is "TIRANE / KALLNUER / 1924" or "Tirane / January / 1924".

The new constitutional assembly formally dissolved the (now, permanently exiled) Albanian monarchy.  The new constitution provided for the creation of a parliamentary republic, with a powerful president, who would serve a seven-year term as the head-of-state and government. 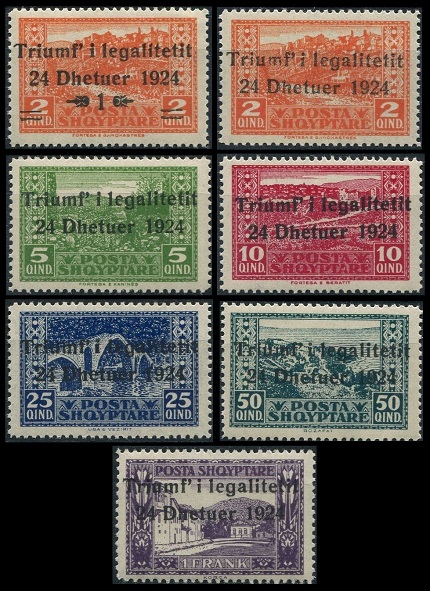 The seven overprinted pictorial definitive stamps of 1922 shown above (Sc. #164-170) were issued in December 1924 to celebrate the Return of the Government to Tirane, following the June Revolution.

In the June Revolution, a peasant-backed insurgency took control of Tirane, and their leader, Fan Noli (1882-1965), became the Regent and Prime Minister of Albania.  The legitimate Prime Minister, Ahmet Zogu (1895-1961), fled to Yugoslavia.  By Christmas Eve of 1924, Ahmet Zogu's forces had re-taken Tirane, re-establishing the legitimately elected government of the new republic.  Fan Noli and his followers fled to Italy. 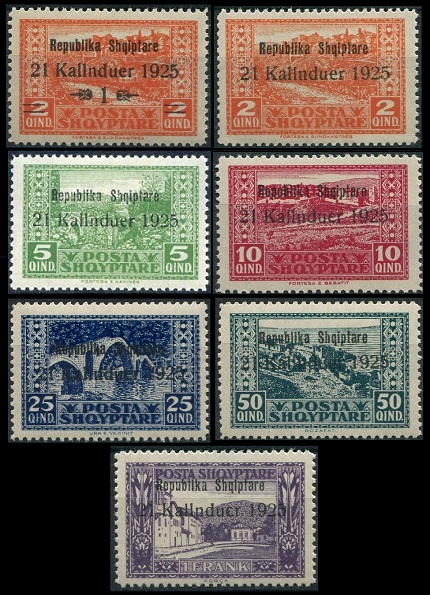 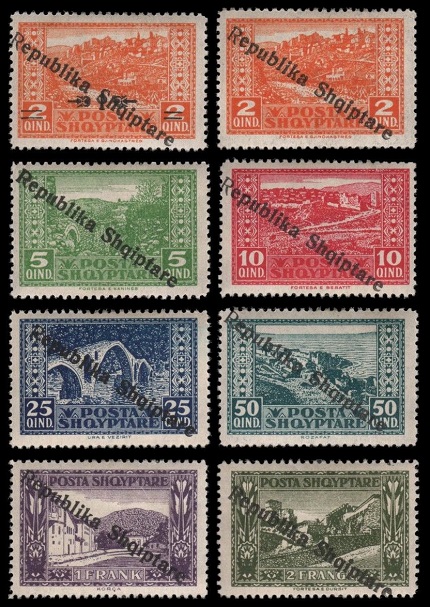 The eight diagonally overprinted pictorial definitive stamps of 1922 shown above (Sc. #178-185) were issued during 1925 to display the new name of the nation on the stamps as "Republika Shqiptare".

During this period, 2 Q. denomination pictorial definitive stamps were re-valued to 1 Q. for use as Newspaper Stamps.  The non-overprinted example shown above is Sc. #163.

The four overprinted and surtaxed Albania charity stamps shown above (Sc. #B1-B4) were issued on November 21, 1924.  The surtax was for the Albanian Red Cross.

The four overprinted and double-surtaxed Albania charity stamps shown above (Sc. #B5-B8) were also issued in late 1924.  The double-surtax was also for the Albanian Red Cross.