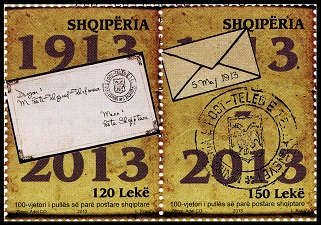 The first printed definitive postage Albania stamps appeared in late 1913, though provisional issues were in use from the middle of that year.

On December 5, 1912, a week after Albania gained its independence from the Ottoman Empire, the Provisional Government founded the Albanian postal service, as part of the Ministry of Telegraphs and Communications. 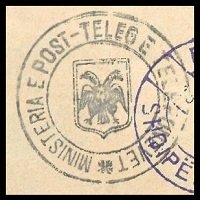 The new Albanian government became a member of the Universal Postal Union in 1913.  In May of 1913, the first Albanian stamp appeared, being a hand-stamped seal applied directly to letter envelopes  In June of 1913, the Albanian Postal Service began utilizing existing stocks of the postage stamps, newspaper stamps, and postage due stamps of the Ottoman Empire, overprinting them for use as provisional definitive Albanian postage stamps.

The first portrait definitive Albania stamp, shown above, bears the likeness of "Skanderbeg".  He was a 15th Century Albanian Noble, initially in the service of the Ottoman Empire.  The Ottomans compared his military abilities to those of Alexander the Great, and they gave him the nickname "Iskender bey" meaning "Lord Alexander".  In a 1459 document, George Castriot signed his name as "Скендьрь бегь" or "Skender beg".  Over the centuries, the title has been anglicized into "Skanderbeg".

The 20th Century was not very kind to Albania or to its people, being a time of political and social chaos from the beginning to almost the end of the century.  During that time, Albania was a province of the Ottoman Empire, an independent principality, a constitutional republic, a constitutional kingdom, under Italian occupation, under German occupation, and a socialist peoples' republic.  It wouldn't be until the very end of the century that Albania would evolve into the stable, Western-style parliamentary republic that it is today.  Albania stamps fully reflect these changes, throughout the 20th Century.

Links to pages, containing information about the philately and history of Albania, will eventually be found at the top of the right column.