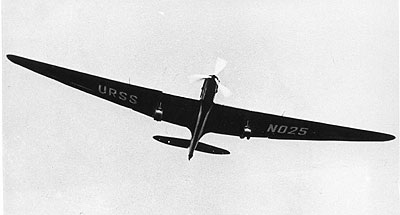 The subject of USSR flights to the USA came up in a conversation I was having with one of my neighbors a while back, concerning historical places to visit in the San Jacinto / Hemet area of Southern California, where we both live. They asked me, "did you know about the Russian plane that landed here in 1937?". HUH? A Soviet aircraft landing in San Jacinto ... at the time, a tiny rural town in the middle of nowhere, about 150 miles SE of Los Angeles, and about 100 miles NE of San Diego? An odd place for the culmination of one of the greatest achievements of flight history at the time!

In 1937, there were actually two pioneer Trans-Polar non-stop flights from Moscow to the Western United States. The first flight, June 17-20, 1937, with a planned destination of San Francisco, ran short on fuel, and it landed at Vancouver, Washington after a flight of 5,670 miles in 63 hours. The second flight, July 12-14, 1937, made a landing in Southern California. 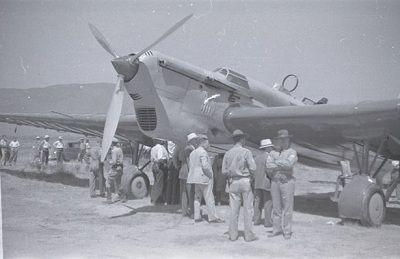 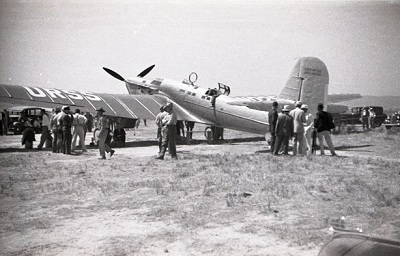 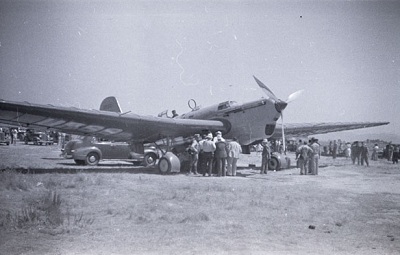 Views of the Soviet ANT-25 in San Jacinto.
From: 1937 photographs

The morning of July 14, 1937, the destination of the aircraft was actually supposed to be Limburgh Field in San Diego. However, all the airfields between Los Angeles and San Diego were socked-in by fog, and the aircraft was forced to divert. The crew flew inland to where the visibility was clear, and the aircraft was able to land in a cow-pasture in San Jacinto, California, after having flown 7,120 miles in 62 hours, achieving a new flight distance record. 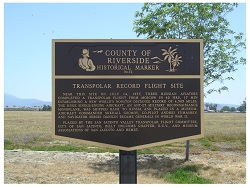 
The flight crew on both of these flights consisted of Mikhail Gromov (pilot), Andrei Yumashev (co-pilot), and Sergei Danilin (navigator). The aviators were taken to March Air Base, in Riverside, for rest and recuperation. They received a ticker-tape parade in Los Angeles, and people came to San Jacinto from great distances to see the huge silver Soviet aircraft with bright red wings, resting in the field. Before their return home, the aviators met with President Franklin D. Roosevelt at the White House. All three of them were welcomed as heroes in the Soviet Union, and they eventually became generals in the Soviet military during World War II.

The aircraft was a Tupolev ANT-25 , a Soviet long-range aircraft, first flown in 1933. The single-engine ANT-25 had a length of 44 ft. and a wingspan of 111 feet. This rather awkward looking experimental aircraft was superb for experimental long range flight attempts, due to its massive fuel capacity. It was originally proposed as a military reconnaissance plane or long-range bomber, but due to its size, weight, and slow air-speed, it was deemed unsuitable for those purposes. Only a few of these planes were ever built and they were completely phased out in the late 1930's.

The ANT-25 that landed in San Jacinto was dismantled and returned to the USSR by ship, where it was put on display in a museum. Unfortunately, the historic aircraft was eventually destroyed in a fire. 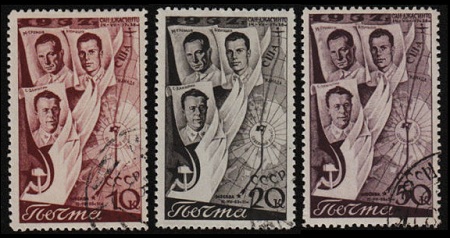