Before Helgoland (in German) or Heligoland (in English) began issuing its  own postage stamps, the postage stamps of Hamburg were used at the post offices on the island.  These are considerably scarce and are seldom encountered today.  The scans shown above were contributed by Dr. Lawrence Mead, APS, APEX, GPS.

The first official postage stamps of Helgoland appeared in 1867, featuring the portrait of Queen Victoria.  The new postage stamps were bi-colored, denominated in Hamburg currency, and they were all printed in Berlin by the Prussian State Printing Office.

As described in the Philatelic Overview article, all of the 1867-1868 issues described on this page will have the following attributes in common.

The Head Type 1 stamps of this denomination were NEVER REPRINTED. 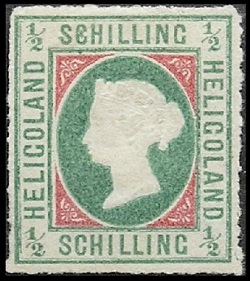 The stamp shown above, from position 15, shows a constant plate flaw in the "C" of "Schilling".  This plate variety is not listed in the Michel Spezial Katalog.  The flaw is on the inside edge of the "C", making the letter appear similar to today's "Є" (Euro) symbol.

The 1/2 Schilling denomination (Mi. #1 II, Sc. #1A) was again issued in August 1868, and this new design featured Head Type 2.  These were printed in Bluish Green & Reddish Carmine.

The majority of the private reprints are various shades of Yellowish Green & Rose.  For further details, see the Links to Other Sites section at the end of this article.

The private reprints of the 1 Schilling denomination are Head Type 3.  There are many different colors of the reprints ranging from Carmine to Red & from Yellow Green to Gray Green.  For further details, see the Links to Other Sites section at the end of this article.

The private reprints of the 2 Schilling denomination are also Head Type 1.  There are many different colors of the reprints ranging from Dull Lilac Carmine to Salmon Red & from Green to Olive Green.  For further details, see the Links to Other Sites section at the end of this article.

The private reprints of the 2 Schilling denomination are also Head Type 1.  There are many different colors of the reprints ranging from Blue Green to Dull Olive Green & from Claret to Copper Red.  For further details, see the Links to Other Sites section at the end of this article.

The 1/2 Schilling Helgoland stamp shown above recently appeared on the US eBay site.  Is this a Plate Proof, from the time production printing of these stamps began in 1867?  No, it is not.  Here's the story ....

A PLATE PROOF is an impression made from a brand new plate, before it is placed into use for printing postage stamps.  The fine detail from any first impression should be clear and sharp.  This example exhibits porosity in the colored fields, the frame lines are of irregular thickness, and the frame lines are broken at the corners.  This example appears to have been printed from a worn plate.

The Michel catalog actually does list two "black" proofs (rouletted and imperforate) for the April 1867 issue, but they do not indicate a known sale price.  This listing may be erroneous.  A recent consensus of the experts in Helgoland philately indicates that an authenticated example of a plate proof of the April 1867 stamp has NEVER APPEARED in the philatelic marketplace.  This may indicate that these 1867 proof stamps may actually have NEVER EXISTED.

Even though these are officially categorized as "reprints", these "black printing" examples of the Hamburg Reprints are actually very scarce.  They are quite collectible, and they are sought after by many Helgoland specialists.  In 1970, Lemberger valued each of them at DM 60,00 in his book.

Links to Other Helgoland Sites

The authoritative work on Helgoland postage stamps is the German language book, "Helgoland Philatelie" by Hellmuth Lemberger, published in 1970.  If copies can be located, they are usually very expensive.  The APRL has a couple copies that can be checked-out by APS members.